Review: A Study in Scarlet by Sir Arthur Conan Doyle 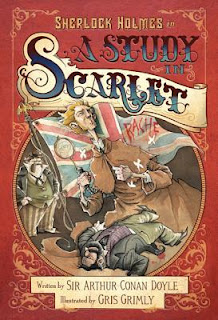 Goodreads Description:
A classic mystery by Sir Arthur Conan Doyle; the first in the Sherlock Holmes series. See how Holmes and Watson met for the first time. A baffling murder with puzzling clues and evil villains takes place and the cocaine-addicted, cold and quirky detective, with his razor-sharp deductive mind and obsessive attention to detail, is on the case. Told from the journals of his faithful companion, Dr. John Watson, join us for a trip to 221B Baker Street and the beginning of the legend of Sherlock Holmes.

Review:
First: The illustrations, thats what is different from the original so thats what ill talk about first xD
I was NOT expecting the characters to look like that at all xD But that doesnt mean I didnt like them lol A LOT, they were entertaining to look at. I probably spent more time looking at the pictures than I did reading the book.

Onto the book. I was kind of confused towards the middle, there was some funny parts and I liked that, its .. The way its written is super formal but keep in mind the time period in which it was written, so some of the writing seems odd. Okay so there was a part 2 inside of this book that I had no idea existed. When I first started reading it I was super confused, it was a complete opposite of what I had read in the first part, but the scenes were so beautiful, and soon enough it started making sense. It would've made better sense to me if I had paid total attention to the book in the first part xD Like I was later like "DUHHHHH get your stuff together Vale!"

Anyways, its was enjoyable, the illustrations were pretty cool, kid friendly, you could say but since it IS Sherlock Holmes by Sir Arthur, its more like.. middle school kids..

Recommend it?
Of course, its a classic