Review: The Heir by Kiera Cass 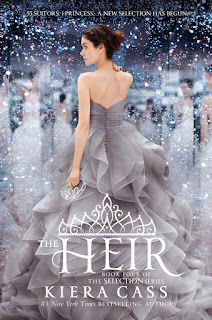 Goodreads Description:
Princess Eadlyn has grown up hearing endless stories about how her mother and father met. Twenty years ago, America Singer entered the Selection and won the heart of Prince Maxon—and they lived happily ever after. Eadlyn has always found their fairy-tale story romantic, but she has no interest in trying to repeat it. If it were up to her, she'd put off marriage for as long as possible.

But a princess's life is never entirely her own, and Eadlyn can't escape her very own Selection—no matter how fervently she protests.

Eadlyn doesn't expect her story to end in romance. But as the competition begins, one entry may just capture Eadlyn's heart, showing her all the possibilities that lie in front of her . . . and proving that finding her own happily ever after isn't as impossible as she's always thought.

Review:
This review will have a million gifs to express my feelings
OH MY GOD EADLYN !

Eadlyn is so freaking bratty and annoying in my opinion.

This  whole review might seem like I hated the book but dont be fooled... I only hated Eadlyn, loved everything else.
Half of the time I thought "how did Maxon and America manage to have such a shit child"

Eadlyn spends a great deal of her time complaining about how no one gets her and she didn't ask for it and how it sucks and the selection is so freaking ineffective... IT SEEMS LIKE IT WORKED FOR EVERYONE BEFORE YOU!

Then the guys get there....
When she makes the first elimination, she was such a bejhgfisfe I usually someone root for characters to be meanish... But damn, Eadlyn was just being a brat!

I have seriously never hated a character so much
"Why did you give it a 4 then?!"
Everything else made it worth it , when she starts having out with Kile or Henri it makes it all worth it.
You start to get the feeling that Eadlyn is starting to realize she is a shit child. I have hope for her, hope that she will stop being a shit child.
I also have my favorite but I have a feeling that it might be too obvious and that it won't be it. Also... That ending destroyed me!

Recommend it?
Yes but you could live without it, don't expect it to be fluffy like America's story