As always, LOVE working with authors almost as much as I love reading their books xD

I read this series a while back and absolutely LOVED it ! Ciye Cho lives in Australia and works as a graphic designer. He writes YA novels in his free time--and his head is often lost in the clouds or some place far from reality...

1) I feel like you are a very mysterious author, there isn’t much about you personally
online, is this intentional? Or are you naturally a private person?

2) Graphic Designer as well as author, very impressive. How long have you been
working as a graphic designer?

I’ve been working as a graphic designer for over ten years. I also had a job as an app
builder a few years ago.

3) When I think Australia, I think of huge bugs (which I hate bugs), what is your
favorite part of living in Australia?

The laid-back atmosphere. As a side note, most of metropolitan Australia isn’t
anywhere near Crocodile Hunter territory ;-) (But that being said, there is a pack of
kangaroos near where I live.)

4) One thing people would be surprised to know about you would be…?

I’m obsessed with cats. I have a ginormous collection of cat knick knacks and figurines
that I’ve amassed over the years. My fascination with cats probably stems from
watching the musical “Cats” when I was a young kid.

1) First thing I want to know is: Where did you get the inspiration for the world of
Niemela?

I’ve always been fascinated with mer mythology, and I wanted to create a fresh spin
on the age old fantasy. One key inspiration was snorkeling in the Great Barrier Reef
when I was younger. I can still remember the colors and sights—the vermilions,
emeralds, and shimmering sands…

2) How did you come up with your characters names? Do they have any particular
significance?

There are lots of different ways. For example, sometimes I try to find names that
sound like they match a particular character or group of individuals (e.g. most
Niemelans have mellifluous-sounding names that hopefully evoke the fluid nature of
ocean life; and Serillico has a sibilant name reminiscent of snakes hissing). With
regards to the main mer characters, I thought it was important to have humansounding
names (e.g. Rolan) in order to make them more relatable.

3) Did you ever have a moment in your writing in which the story seemed to take a
life of its own in a way that surprised you?

I didn’t plan the overall arc of the series ahead of time. So in many ways, each book is
a surprise in itself.

4) Did you have a character that you liked so much that you tweaked your original
story a bit to fit them more in it?

Yolee. Her role grew much larger in book two, simply because it was really easy to
write her into scenes. She has a way of popping up (literally) in the most unexpected
places.

5) Biggest challenge of writing the series?

Trying to tie together all the various elements and plotlines.

In order to proofread a piece of text, I often need to distract part of my brain. It
seems nonsensical, but I find that humming allows me to focus more squarely on the
words. Weird, right? Perhaps my brain is wired incorrectly.

2) Favorite quote ever? A motto?

I can’t think of a quote or motto, but one of my most used phrases is “Will it catch
fire?” Don’t ask.

I’m currently having a cup of coffee and a peanut-butter-and-nutella sandwich. PBN
sandwiches taste just like Reese’s chocolate cups. Try one.

5) If you could travel to any point in time, what would that time be and why would
you want to go there?

Since we’re approaching a Star Wars-themed December, I think I’d probably go back to
1977 and watch the first movie. Afterwards I’d go on a shopping spree at Toys’R’Us and
buy up all the 1977 Star Wars action figures and merch, then travel back to 2015 and
make a killing on eBay. Yes, so high brow of me… Not!

6) What was your favorite subject in school and why?

Art. As an insecure teenager, I really found a lot of confidence in being able to express


myself in paintings and drawings. 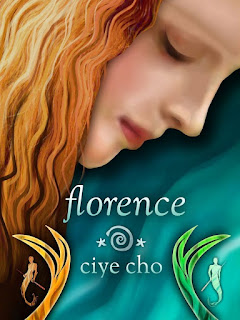 Seventeen-year-old Florence Waverley is out of her depth. Literally. Kidnapped and taken below the waves to the mer world of Niemela, she is the ultimate gift for merman Prince Kiren: a human familiar tied to his side. But nothing is what it seems amid the beauty and danger of a dark ocean.

Every Niemelan has a role to play, from the mermaids who weave towers out of kelp to the warriors who fight sea monsters. But in trying to survive, Florence will end up in the middle of a war between the mer and the Darkness. A conflict that will push her between two brothers: Kiren, the charmer inexplicably drawn to both her and the monsters; and Rolan, the loner who has been pushing her away since the day they met. But in order to take a stand--and find out where she belongs--Florence will have to risk it all: her life, her heart... and her very soul.