Review: The Swap by Megan Shull 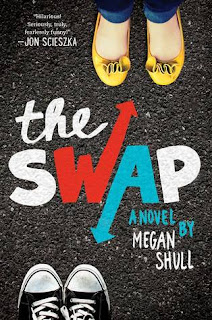 ELLIE spent the summer before seventh grade getting dropped by her best friend since forever. JACK spent it training in “The Cage” with his tough-as-nails brothers and hard-to-please dad. By the time middle school starts, they’re both ready for a change. And just as Jack’s thinking girls have it so easy, Ellie’s wishing she could be anyone but herself.

Then, BAM! They swap lives—and bodies!

Now Jack’s fending off mean girls at sleepover parties while Ellie’s reigning as the Prince of Thatcher Middle School. As their crazy weekend races on—and their feelings for each other grow—Ellie and Jack begin to realize that maybe the best way to learn how to be yourself is to spend a little time being someone else.

Review:
First off, I loved that this isnt a romantic love story !
Yay for that! Sometimes I don't want to read about a love story, that not every guy and girl in a book will fall in love with each other so freaking quickly or feel super strongly about someone (romantically) after a couple of days xD That being friends is okay, ya know?
It was a great and amazing book! Its very well written (Even though I do have the ARC edition and there are mistakes xD), but what I mean is that  you honestly get the feel that they are 2 totally different characters and what they feel and learn. Like you get it that the boy is a boy and has all his boy issues and Elle has to face them and Vice Versa with Jack having to deal with being a girl.
I also feel its very realistic, particularly in Elles case, the way youre just scared to change and under estimate can you can or cant do particularly when you reach middle school and people start changing a lot, wearing make up and changing everything and some people just don't want to do that you know? And they shouldn't have to.

I freaking HATED Sassy, I wanted to cut the peep.
I loved it. It was also funny and cute, particularly when they first start to try and deal with one anothers body and life.
I did however feel like their lives were such an opposite, not so realistic but... What would I know, just because I dont know anyone like Elle or Jack, doesnt mean its not realistic. What I mean is that Jacks dad was so unloving and SO strict like treating them as if they were.... I don't even know what, Im sure even in the military they have a bit more compassion. I don't really know, Ill have to ask my friend, Alex, to see how they treat him in training xD. And Elles mom was super friendly and sunny and understanding like... I don't think any parent is like that. Like if any parent wants their kid to clean their rooms, they wont be like oh please honey and let them do what they please and still spoil them all the time? Like sure, parents can be loving and stuff, but they are still parents, you know? I don't know, that's just not what I have seen in my own personal life xD

Recommend it?
Yups, why not.