Glad I picked this one out of the jar this week! It's literally perfect xD

By jar I mean that I have a jar that is covered in gold glitter on the inside (with modpodge so it doesn''t go all over) with about 100 topics in it and the way I pick my topics is I put my hand in the jar and randomly take out a piece of paper with the topic and write about that :D So yay for zombies around halloween.

So I got World War Z (british cover) a couple of months ago for a class, we were only supposed to download a couple of chapters but since I liked the movie, and felt like reading zombies, I went ahead and order this book online, I got the british cover cuz I thought it was so beautiful. Anyways, I started reading it and about 7 pages in, I knew the book was going to be SSSSSOOOOOOOOOO freaking different than the movie, like big time xD But it was still good.

I WILL BE QUOTING SOME PARTS OF THE BOOK! BEWARE!

The following excerpt I copied directly from the book, ish, I used ..... to separate large sections and only used the part I wanted to talk about.

That part of the book can be found in the first chapter and it is literally the scariest thing I had ever read, the way the author described it just implanted it into my brain and I could see it and it was freaking awful. It was what a zombie was supposed to be ! I imaged what it would be like to know that this thing trully existed and it terrified me, however, it leads me to the next topic.

It's so true, it is honestly one of my favorite zombie books, it speaks volumes about the dead and the living, people ARE in denial about things that currently go on in society, or simply turn a blind eye to it, if its not going on in their area, they ignore it. Its that simple.

However, in the book, even when it WAS in their area they ignored it! IT WAS HORRIFYING !

Next zombies I shall talk about: 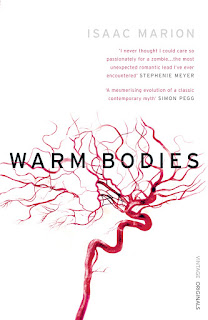 I have the American cover of this book but damn is the British cover beautiful.

Honestly, the UK has such beautiful cover ! The Hunger Games is also beautiful as...

Zombies by Isaac Marion, these aren't scary in the typical way that a zombie would be scary. It's more rationally scary. In The New Hunger the way the zombie is trying to understand what happened to him and trying to calm his hunger and is trying to eat what his brain remembers as food. Or the memories of the Julie and Nora as they try to be safe from the world around them, but they are still kids, forced to grow up.
That's all just very creepy and sad.

On to Warm Bodies again, R is, of course, one of my favorite zombies. At first I was annoyed with it, like all of these things, he remembers from his previous life, the knowledge. But then I realized, hey, amnesia works like that, you remember what a cake is when you see it, you remember what a car looks like but you can forget everything about your past life before the moment in which you "wake up again" Its a real thing. So I was like okay, that's super scary. Having to try and deal with this every day and trying but failing to even remember your own name or what you did or why you mattered or didn't.

Warm Bodies is beautiful, it makes you think of the world, it really does.

So I want to say this.
The book to movie for World War Z is super freaking different... BIG TIME!!!
Warm Bodies is also somewhat different, by SOMEWHAT, I mean that there are details here and there that were changed, like what R wears, but many things, even some dialogue, is exactly like the movie, so .. YAY for that.

Plus, extra yay for Brad Pitt

Everyone has their own ideas of zombies, book wise, I love 2. Brooks' zombies, these completely animalistic and savage zombies, and Marions' Zombies that are struggling with themselves but slowly loosing their humanity unless something changes. Like.. it's very deep xD