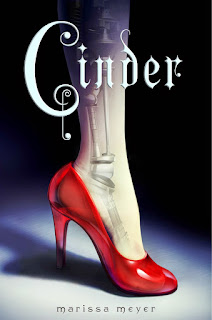 Goodreads Description:
Humans and androids crowd the raucous streets of New Beijing. A deadly plague ravages the population. From space, a ruthless lunar people watch, waiting to make their move. No one knows that Earth’s fate hinges on one girl.Cinder, a gifted mechanic, is a cyborg. She’s a second-class citizen with a mysterious past, reviled by her stepmother and blamed for her stepsister’s illness. But when her life becomes intertwined with the handsome Prince Kai’s, she suddenly finds herself at the center of an intergalactic struggle, and a forbidden attraction. Caught between duty and freedom, loyalty and betrayal, she must uncover secrets about her past in order to protect her world’s future

Review:
Updated review! This one will be a lot better than the first one I promise xD
Older reviews are just plain bad lol xD

Anywaysssss lets start at the beginning!
Its always tough when you read start a series that has a world way different than your own but it's also so freaking amazing because you make a whole new discovery. Its like a treasure!

I was a bit uneasy about Peony at first, I didn't it wasn't until later that I was like D: Peony is actually the good guy ! I did hate the stepmother >.> I mean, she couldve been a lot worse but you know... No.. I have to hate SOMEONE!

Im trying to think of what to say without spoiling. Imma just say that I was STARTING to suspect the ending of the book before it was actually said, but I was still shocked to actually hear it said you know?

I've said it once and i'll say it again, Marissa Meyer is one of my favorite authors.

I like the fact that the romance isn't so like... HUGE in this story. That Cinder is more concerned with her well being than trying to get this guy that she likes. That she first of all obvious feelings for but then would go to the ends of the world to get with.

She can slay me any day of the week.

When I make my review for Fairest, Ill be using like 30 thousand gifs to explain my emotions and most will probably be from Snow White and the Huntsman xD Just saying. AND ILL BE SPOILING! Its really hard for me to talk about this series without spoiling. I feel like everyone probably knows about the books by now and that spoilers wouldnt really be spoilers and I should be able to talk about the things in the books but like... Maybe im wrong xD