I feel like love triangles have been talked about by everyone at this point.... So lets add one more to the topic xD

I used to be a huge fan of love triangles and don't get me wrong, I still somehow enjoy it... SOMEHOW... but on a tough day, I hate them >.> Why? I've been stuck in them, ish... So having to read them in a whole bunch of books sucks.

Why can't a character not have to be in love with one character or only like one character, period. Like Hazel and Guz, there was no one else but them.

If Isaac had been in love with Hazel or Hazel had a bit of feelings for him, the book would've been way different.

The reason I talk about triangles today, is because I read a book over the weekend that had a love triangle in which the girl was pretty much bipolar on the guys. I won't say which book, in order to avoid spoiler, but it was pretty much her sleeping with this guy cuz she had feelings for him, then waking up the next day and saying how discussed she was by him and then going to the other guy, making out with him and getting engaged but inside she is already regretting it >.> LIKE WHHHYYYYY why must an author do that?

Nor should they, but there has got to be a point in which its not such a HUGE thing in the book, where the character is literally making stupid decisions.

But hey, at least its not as stressful as a love pentagon
Too many gifs to include BUT 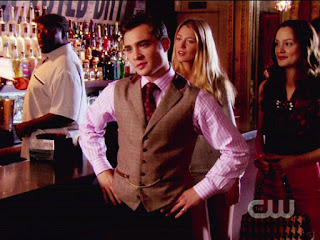 Im talking to YOU gossip girl ! I get that in the books it might not be like the show but STILL! I mean come on! If you have seen the show, you know what I am talking about.
If you haven't... You should

A book can totally be epic and amazing and with love drama WITHOUT a triangle and further meanings between 3 people without them being IN love with each other!

I ain't saying that the 2 people interested in one another should be in love with one another the WHOLE time, and that no doubts will happen in the story line.. It wouldn't be as interesting without it, but when it takes up a huge chunk of plot, it can irritate me (THE EXAMPLES I USED ABOVE MAY OR MAY NOT APPLY TO WHAT I AM TALKING ABOUT)

What are YOUR thoughts on love triangles?
send me an email and tell me what you think. subject line: Love Triangles