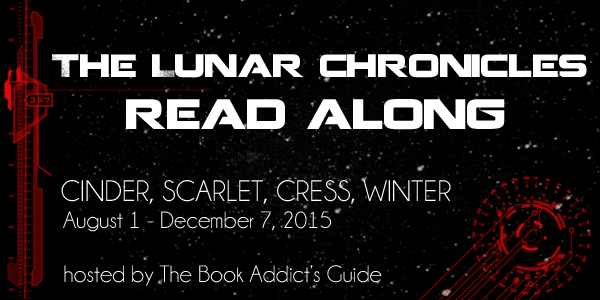 I signed up to be a part of the Lunar Chronicles Reread Along hosted by The Book Addict's Guide and I am finally getting around to posting about it ! YAY!

So she so kindly gave us ideas about what to write, besides making a review, which I'll be posting later on this week.

So I want to start off with how I got into The Lunar Chornicles.

Not at first anyways.

I first heard about the series when i created my Instagram account (@booksbyvale) and I saw a bunch of people posting about Cress and I really liked the cover, so I did my research and saw that Cinder (The first book) was a re-telling of Cinderella.

Now, if you know anything about me and for those that dont.
I LOVE CINDERELLA!

She's my favorite princess xD Well, one of them, they all hold a special something in my heart xD

So I checked out the first book from the library, an ebook. And I started to read it and I got a couple chapters in and found it boring.

So about 2 months passed and the bookoutlet had a sale for the first 2 books. So I bought them and once I got them, started reading them right away.

Best choice I ever made!

I was hooked ! I binge read it and then moves on the second one (before I made sure to order book 3 and check out 3.5 from the library) My

My addiction grew from there u.u

Up until recently, I had all the books in paperback, hardback and ebooks xD
I gave away the paperbacks to a friend xD

So that's my story xD


Now one of the things we could talk about for the Cinder Read along is which of Cinders Cyborg features I would want to have.

Her eyyyyyyyyyyyeeeeeeeeeee!
It would totally have to be her eye.
The fact that she can tell when someone is lying and just be like

It would be incredibly useful you know?

One huge thing that I would like to talk about from the book is the discrimination towards the cyborgs.
That was huge for me. Like I would've awlways assumed that people with cyborg abilities would've been treated better or everyone would've gone out to get surgeries to enhance themselves, kind of like The Hunger Games.

But the fact that they were actually looked down upon spoke tons to me.

We all see it everyday! A few years ago I got a chance to work with kids with autism and we would be able to go out to lunch with them during out lunch time and simply be there with them, play games that they liked and such. And every time we would head out to the classroom and into the play area that they had, people would make SUCH an effort to not look our way

such and OBVIOUS effort to try and look casual.
But totally failing at it xD

Others would simply laugh when a kid would freak out for what (to them) seemed like no reason and they would scream.

I hated it >.> So when I read that the cyborgs in TLC were discriminated and frowned upon for something they had no control over I was like holy shit. Meyer is going there and I love it.

I don't know how to explain myself on this xD

But I love the fact that you can relate this book to current issues on somethings, kind of speaks about society, makes you think.

Or hell maybe thats just me.

But hey, this is my discussion anyways, that's what I think lol

TLC says more than it actually says, it has a messege, all books do.

Cinder is unique and she is amazing. People in her world consider her a freak, but shes not.

That's what I get from this book , that no matter who you are you're amazing as .... what others might consider an imperfection, should be taken to your advantage, flaunt it, you're perfect no matter who tries to bring you down.