Review: Plus One by Elizabeth Fama 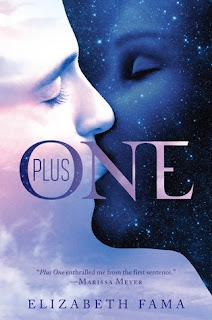 Goodreads Description:
It takes guts to deliberately mutilate your hand while operating a blister-pack sealing machine, but all I had going for me was guts.Sol Le Coeur is a Smudge—a night dweller in an America rigidly divided between people who wake, live, and work during the hours of darkness and those known as Rays who live and work during daylight. Impulsive, passionate, and brave, Sol deliberately injures herself in order to gain admission to a hospital, where she plans to kidnap her newborn niece—a Ray—in order to bring the baby to visit her dying grandfather. By violating the day-night curfew, Sol is committing a serious crime, and when the kidnap attempt goes awry it starts a chain of events that will put Sol in mortal danger, uncover a government conspiracy to manipulate the Smudge population, and throw her together with D'Arcy Benoît, the Ray medical apprentice who first treats her, then helps her outrun the authorities—and with whom she is fated to fall impossibly and irrevocably in love.Set in a vivid alternate reality and peopled with complex, deeply human characters on both sides of the day-night divide, Plus One is a brilliantly imagined drama of individual liberty and civil rights—and a compelling, rapid-fire romantic adventure story.

Review:
As I've mentioned possibly 50 times by this point, its one of my favorite books xD
Its that easy xD

There is something about the topic itself, the fact that they are separated into time zones and they cant really mix that is like WOW

Like if they were able to socialize without it being like.. ILLEGAL, it would be okay, but no, they are separate and they are treated differently.

I still remember the first time I read it... It was like BAM in your face right into the action xD
The writing is beautiful, the characters are beautiful, the cover is amazing!
Seriously, that cover is one of my favorite covers, it speaks so much about the book, like total opposites coming together.

I seriously need a freaking sequel for this book though >.> like BADLY I have gone as far as considering fan fiction for this book and making my own sequel but there is no way it would turn out as good xD Thats literally the only reason I haven't written fan fiction. That and the fact that I often ditch my stories afte'r a while xD Since i got a desktop and my laptop died, I have stopped writing u.u

Recommend it?
I really, really do