Review: To Kill a Mockingbird by Harper Lee 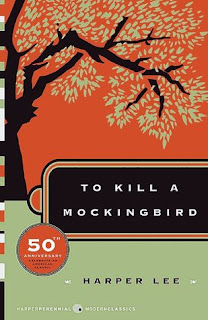 Goodreads Description:
The unforgettable novel of a childhood in a sleepy Southern town and the crisis of conscience that rocked it, To Kill A Mockingbird became both an instant bestseller and a critical success when it was first published in 1960. It went on to win the Pulitzer Prize in 1961 and was later made into an Academy Award-winning film, also a classic.

Compassionate, dramatic, and deeply moving, To Kill A Mockingbird takes readers to the roots of human behavior - to innocence and experience, kindness and cruelty, love and hatred, humor and pathos. Now with over 18 million copies in print and translated into forty languages, this regional story by a young Alabama woman claims universal appeal. Harper Lee always considered her book to be a simple love story. Today it is regarded as a masterpiece of American literature.

Review:
This is a book I feel like half the world has read, literally xD Whether its by choice or assigned reading. The reviews are mixed. Its a book people either love or hate. And part of the hate I feel like is born out of it being assigned reading.
I didnt hate it, but it also isnt my favorite book. I decided to read the book after I finished my reading goal for the year of 70 books by the end of April, so I was like okay, I need a more relaxed goal, so I decided to read bucket list books, books that are classics and people must read them in their life time. This is totally one of those books according to the majority of articles that I came across. It is an interesting read, can't argue that, it does have racism in the book but that is to be expected, its part of the story and its acknowledged and we gotta keep in mind that it was released in 1960 so its like... Very much into the time, specially considering when its set.
That sounds like a douchy time thing to say.
Anyways, the ending of the book does make me particularly interesting on how possibly people reacted to this book, the whole inter race relations wasn't all that common at the time, and when it happened, it set both parties in danger in the South.
The main issue in the book is something that we have all heard about, the prejudice that occurred in those times (although we aren't strangers to that now a days either) and its kind of hard to swallow. Scout, the main character failed to impress me and that is probably my biggest issue, I didnt hate her per se but I didnt care for her much which is a problem because shes the one taking us on the journey.

Recommend it?
Yes, everyone needs their own opinion on this book.