Review: Fairest of all by Serena Valentino 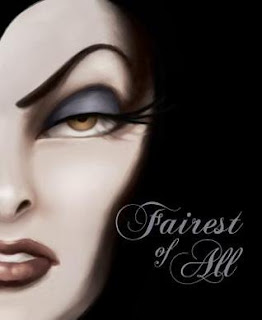 Goodreads Description:
The tale of the young princess and her evil stepmother, the Wicked Queen, is widely known. Despite a few variations from telling to telling, the story remains the same—the Queen was jealous of the girl’s beauty, and this jealousy culminated in the Queen’s attempt on the sweet, naive girl’s life.

Another tale far less often spoken of is the one that explains what caused the Queen to become so contemptuously vile. Still, some have attempted to guess at the reason. Perhaps the Queen’s true nature was that of a wicked hag and her beautiful, regal appearance a disguise used to fool the King. Others claim that the Queen might have hated the girl for her resemblance to the King’s first wife. Mostly, the Queen is painted as a morally abhorrent woman who never loved another being during the course of her miserable life.

In fact, the theories about exactly what cause the Queen’s obsessive vanity and jealous rage are too numerous to catalog. This book recounts a version of the story that has remained untold until now. It is a tragic tale of love and loss, and it contains a bit of magic. It is a tale of the Wicked Queen…

Review:
I freaking LOVE origin stories
Now I will be the first to admit that the Evil Queen from the Disney Snow White has never been my favorite villain. It could be because she looked super creepy and I wouldve rather avoided her all together even though I used to watch Snow White over and over again.
But her origin story was absolutely EVERYTHING! I enjoyed it so much and it made me so sad. She really loved and life failed her! That and it was... well actually I shall stop at that because SPOILER ALERT! But like oh my gosh!
I really cant wait to continue the rest of the origins series! This is what I needed all along!

Recommend it?
Yes I do!