Review: A New Hope: The Princess, The Soundrel, and The Farm Boy by Alexandra Bracken 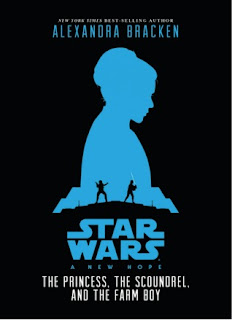 
The galaxy is at war.

Although the Rebel Alliance has won a few battles against the Empire, hope is fading. The Empire is about to unveil the greatest weapon the galaxy has ever seen--the Death Star. The Rebels' only chance to defeat it now lies in the unlikely hands of a princess, a scoundrel, and a farm boy....

Review:
So I totally went the Audiobook way because lately I have been obssesed with audiobooks and life is so much easier with them!
I am so glad that I did!
It has music and effects and in my opinion the male reader sounded a lot like Han (it could be the speed at which I read it)

Of course this book is VERY incredibly similar to the movie
SO YASSSS
I originally wanted to read these when they first came out but it isnt until NOW that I finally got to them
As soon as I finished reading the book I was like YAS I gotta watch the movie.


There are a few details, mostly when it comes to feelings that are added to the book, which I feel like made it a whole lot better.


This is probably the best way to read the books without reading the original ones.

As much as I have watched the movies, specially the original trilogy, I had never really thought of the age difference between Leia and Han until now
Like WHET
Sure its not as weird, its only a 10 year difference but its still odd to me just now that I think about it.
I also did some more research and found something interesting
That Leia could possibly be 2 years older than Luke !
Yes they are twins but things work differently in space

Here is the research
The actual paper can be found there and you can download it to read it yourself. Hella confusing the first time but its worth a read.

Recommend it?
FUCK YEAH
The audiobook is freaking amazing I totally freaking recommend it too
Brough to you by Vale at 12:00 AM