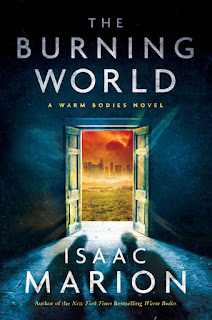 I recommend you check out my review for Warm Bodies first before reading. (Link in the name)


Being alive is hard. Being human is harder. But since his recent recovery from death, R is making progress. He's learning how to read, how to speak, maybe even how to love, and the city's undead population is showing signs of life. R can almost imagine a future with Julie, this girl who restarted his heart—building a new world from the ashes of the old one.

And then helicopters appear on the horizon. Someone is coming to restore order. To silence all this noise. To return things to the way they were, the good old days of stability and control and the strong eating the weak. The plague is ancient and ambitious, and the Dead were never its only weapon.

How do you fight an enemy that's in everyone? Can the world ever really change? With their home overrun by madmen, R, Julie, and their ragged group of refugees plunge into the otherworldly wastelands of America in search of answers. But there are some answers R doesn't want to find. A past life, an old shadow, crawling up from the basement.

Review:
There is a point in a book that no matter how slowly you read it in order to enjoy the taste of it longer, like a good wine, you just can't put it down and have to see it to the very end.
This book is deep, there is so many underlying messages, at leas there were to me.
Maybe it is because of the times that I see them, more so than any other day
(Election week, more specifically Nov 9)

There is a message I got above all others from this book, personally
Sometimes it is better to not be able to remember the past.
We always thought of R as being a romantic being.
In the figurative sense.
He saw the world as no one in the modern world sees it today.
Finding the beauty in the most basic aspects of being human and the basic services of the modern world.
Not just being human, but what it means to BE human.
The book (Warm Bodies) was nearly poetic, in a sense, considering his lack of verbal language until he falls in love with with Julie.
However in this book we discover that he isn't as perfect and possibly dreamy (in the sense that he changed because of love). That he was exactly as the people who brought the modern world and plunged it into darkness.
Heck, Ill say it.
He WAS one of the people who did.
He did some fucked up shit.
Even as he is transitioning into being human he has dark thoughts, almost a fear of turning back and also discovering who he truly was.

Then we touch the political undertones of the book, as they face what could be their biggest problem, bigger than the Undead.
A corporation forcibly trying to take over and enhance their power in some sort of way using methods that are probably as twisted as can be.

R was thought of in such a positive light, like look at this man, how great he is. What he is doing not just because of love but for himself. He wants to better himself for him. This book grounds him, puts him in a light of  "This could be anybody, he did what anyone would do, look after himself. This could be you"
In the end, it isn't just the ones that did good that saved themselves, that regained their LIVING status back, its anybody. The world isn't fair. This book doesn't paint you a world were at the end of the day the good people win. At the end of the day, anyone can win. It paints the picture of one thing: At the end of the day, its every man for themselves, god damn the consequences and anyone who gets in the way.

And its those consequences that the group now has to face. They are now going against that.

This is a book that you can simply enjoy if you read it and think of it as an intense world enlarging.
But if you take the time to apply some of the things in The Burning World into our modern world, try to see the similarities and the difference, to ANALYZE it and think it through, the you find this to be nothing short of a genius piece.

Recommend it?
entirely and 100% stand behind this book and gladly recommend it to all who read this and I see

So currently, Isaac Marion is having a spectacular rewards system for those that pre-order through his website
if that doesn't sound good enough how about this
IT IS THE CHEAPEST PRICE YOU'LL FIND FOR THE BOOK!
Yeah, not even amazon or the book depository will have these prices (unless you buy the UK paperback)
I completely recommend you guys  buy through his website over any others and heck, maybe you'll get some extras!

I have already pre-ordered, sadly its a UK paperback so I get no rewards
So feel safe when I say go buy this book, I'm not doing it for myself.
Brough to you by Vale at 12:00 AM