Game of Pages: Me Before You

Me Before You by Jojo Moyes

Review by Valeria
Discussion by Angela and Valeria 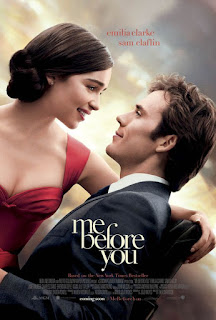 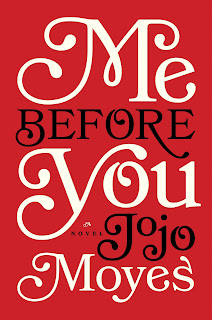 Oh boy
This is one of the few stories that makes me cry continuously.
I bawled my eyes out in the book like no tomorrow

*Insert Dont Forget About Me by Cloves here*
So this book is about Lou and her perfectly average life. Of course that is until she meets Will. After her old job is closing, Lou is hired as a companion for Will, who was left paralyzed after an unfortunate accident. Will is, for lack of a better word, bitter about loosing the life he used to have. However, Lou who hardly lets anything dampen her spirit is set to get through this job in order to help her family.
That is just the beggining of it. This is seriously one of my favorite books. As much as the story makes me cry, I love it. It is realistic!
I have watched the movie about 5 times.
This last time I watched it with my mom
(her first time)

She started crying about 5 scenes before me, and I was like YAS! I have broken the curse but yeah
That didnt happen for me

The adaptation was actually really good in my opinion, the acting was great and feelings were just as shattered as they were in the book.

A: Lou, she's very cute and funny and she doesn't care what other people think of her she just lives her live.
V: Okay so there is a little bit I like of each one of them but then I went and thought Lou but as I really analyze things I feel like I like will more. Will is more realistic, in the end he proves that sometimes love isn't the answer to everything, just because you have someone you love, it doesn't actually mean that the whole world will be okay, that you can destroy anything that tries to stop you. He is realistic. As morbid as it sounds.

If you could go on holiday with will, where would you take him?

A: well it's hard to say... Because yeah most places he couldn't go... But I would say let's do a world tour, let's see what beautiful places earth has to offer.

V: It IS so hard to say, I mean personally, tour places that he hasn't been to and well, that he could see, even if its simply via helicopter. I personally would love to tour Europe but I feel like that is something that would be painful for him to have to relive, so only places he hasn't been to.

What scene made you cry first? Book and movie.

A: None.... Not that I didn't think it was sad or that I don't like the ways they act in the movie. i love the book it's great and the movie too! But i'm just not a person who can cry easily... I haven't cried in years, so yeah i don't cry when things happen in real life so I don't do for a book or movie either :/
V: Oh gosh, I can't believe Ang didn't cry! How are we sisters? HOW !!

I first started crying when in the island Will starts telling her how he hasn't changed his mind, how he is still in pain and meeting her was great and everything but it doesn't change how he feels about his life.

what would be your reaction, if you one day wake up and you're in a wheelchair?

A: scream, I would definetly scream.
I don't wanna say anything wrong, and I can't really say much about it... Me personally, I would be so devastated, to not being able anymore to do so many things with my legs, or arms or any part of my bone. i already hate it when I break my leg and being disable for a few weeks, which is actually nothing... So I really admire everyone who's in a wheelchair and still is happy and enjoys life! These are the strongest people I know and I'm just weak!
V: I mean I feel like this is one of those things that  you really can not prepare for and you really don't know how you will react. Sure in some cases you do know that you might eventually end up in a wheelchair due to some medical issues. So yeah, I don't really know how I would react if that was my case. I have very positive days and very negative days so maybe thats how it would be for me. More negative than positive though. Thats just how I am. Very Will-ish, Realistic-Negative.

What do you think about will's decision? And would you have accepted it?

A: on the one hand, i don't get it.. Why would he give up his life, make the life of other ppl miserable by dying... But yeah imagine he would say okay, I won't kill myself. He would be unhappy, each day of his life and with him everyone around him would know and feel it. And in my opinion, that's way harder.. But in general i'm against suicide, except someone is so ill, that he only has a few more days, weeks to live and all this is horrible pain....
V: Okay, as a stranger, yes I can accept it. As Lou, I would've hard the hardest time accepting it, this is someone you love, someone you wont be able to talk to or hear their voice anymore and this is something that they are deciding. It almost seems selfish. As Will, anything anyone else things is selfish. It is his life, his choice, and only he truly knows how much pain he is on and just where the bar has ended.

Do you think the parents could have changed his decision, if they actively tried more?

A: nope. When someone has made up their mind about something like this, and even planned it for a very long time, then you have no chance changing their mind... And like I already said, maybe you can change it to not killing himself, but not to being happy again...
V: I really don't think so. This isn't just something that only Will knows how he wants to approach it but something that is purely his decision because only he knows just how hard it is and it is HIM that has to be dealing with it. His parents, as hard as they tried, just had no chance from the point Will made his decision.

Would you wear the bumble bee tights?

A: yes and no. In my opinion, the bumble bee tights symbolizes Lous character perfectly. She doesn't give a f**k about other peoples opinions and she just wears what she wants. I love that and I am kinda like her in that way. But the bumble bee tights themselves are not my taste, but yeah everyone has a different taste :)
V:  Are you kidding me?
FUCK
YES.

I love tights! I am not as outstanding as Lou enough to wear funky outfits with tights all the time. If I live somewhere colder I totally would. But I live in Los Angeles so daily or even weekly tights arent an option. But bumble bee tights are easy enough, I would ROCK those babies! The thing I DO like to put myself out there with is colorful bags or wallets xD

So that was that
THANK YOU FOR READING
and I (Vale) Apologize for all the spoilers BUT I did warn !
Brough to you by Vale at 12:00 AM