Review: The Cruelty by S. Bergstrom 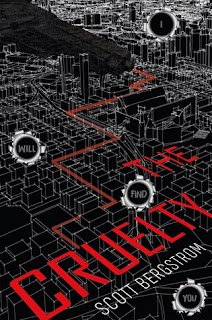 Goodreads Description:
When her diplomat father is kidnapped and the U.S. Government is unable to help, 17 year-old Gwendolyn Bloom sets off across the sordid underbelly of Europe to rescue him. Following the only lead she has—the name of a Palestinian informer living in France—she plunges into a brutal world of arms smuggling and human trafficking. As she journeys from the slums of Paris, to the nightclubs of Berlin, to the heart of the most feared crime family in Prague, Gwendolyn discovers that to survive in this new world she must become every bit as cruel as the men she’s hunting.

Review:
Lets take a second to enjoy the nice and pretty cover....
Second over
Okay so the whole over line plot line of the book was up my alley. My problem was that from the very beginning, Gwen, got on my nerves.
Okay so there is this bad as chick that pretty much goes to Europe to rescue her father and goes into the whole world of gangs.

Spoiler alert, ill talk about the scene that pretty much did it for me. So there is a bully who is mocking her and well... Bullying, long story short Gwen tells her to go F herself and the mean girl slaps her and a teacher spots this.

Great, Gwen will get some justice.
WRONG!


Gwen ends up in trouble for telling the girl off.
Lets ignore the fact that the girl was bullying her and slapped her.
Way to go adults.

There is also the scene that Gwen finds out about her dad. It just felt a bit heartless to me.

Now, the way that the book was written just felt off to me but of course, that has never put me down because I am a firm believer that there are scenes in books that just MAKE a book soooo much better.

I mean she becomes like the opposite of what she was three weeks before.

Like seriously this bad ass ready to kill kid.

Now, I'm trying VERY hard to to spoil specially because I JUST finished reading this like 5 minutes before writting this review (a few days before this post goes live)
There are scenes in which her badassery leaves you like

But I still couldnt shake off her as being annoying, I mean I understand that the author did her the way he did to show a greater contrast to her change later in the book.
So as to not be like oh yeah she was born this way she just needed someone to tell her she was special.
BUT I guess my brain prefers that?
Im not sure what it was about her exactly.

Recommend it?
Yeah, I mean there arent a lot of thriller crime YAs
At least not many that I have come across