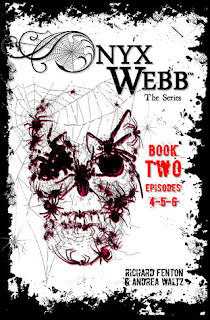 Goodreads Description:
Best-Selling Authors Fenton & Waltz Welcome You to the World of Onyx Webb. This is Book Two. (Episodes 4, 5, and 6) One reviewer says, "Fabulous. Different. Odd. Crazy. Wonderful. I've never read anything like it. You've created the weirdest, coolest new genre of fiction and I love it."
The Onyx Webb series follows the unusual life of Onyx Webb along with a central group of characters in various locations and times. Written like a book version of a supernatural soap opera, each character’s story moves forward with most every episode. It may appear that the characters are entirely unrelated and yet episode by episode, the connections will become clearer And this is especially true in Book Two. Like being an inch away from a spider web, with each book, the web will move further and further away revealing the full story of every character and most importantly, the stunning conclusion for Onyx Webb herself.
In Book Two... It's the 30's and Declan Mulvaney and best friend Tommy Bilazzo learrn to survive at the Open Arms Orphange despite the adults who run the place. It’s 2010, and Koda Mulvaney is insane trying to see the girl in the mirror again. Onyx Webb is finds herself living all over the country married to the crazy German, Ulrich, with no way out.
Special Note: All the pictures and graphical memes can be found in our Onyx Webb Series pinterest catalog.

Review:
I have previously stated my love for this series, for the story lines and how they smoothly flow into one another and for the unique way it is written in.
This series is a ten part series that I will leave down for you to either buy or know when it comes out.
I did have to reread the first book since it was a while since I last read it but I did not mind in the least. This installment starts soon after that and continue with the last characters. As we read in we do get introduced to new characters. I think my new favorite for this book, last book my favorite was Koda, in this one I would have to say its the Sister. I mean, there was one particular episode, I believe it was actually the 4th episode that just hit me in the face with her. I do mean this in the best way possible. She is speaking of how she is pretty much gods messenger but whatever it is that she did, god would understand. REGARDLESS IF IT WAS THE RIGHT THING TO DO. Her logic is pretty much, this is better in the long run, god isn't stopping me, so its right, he gets me. And I was like

I just could not even XD
Onyx's story got more intense of course and I still cant stand her husband. I never will. That is all I will say. End of story on that. So back to the important. It always impresses me, each and every episode the way that these 2 authors worked together, flawlessly seaming everything together, you cant tell who wrote what but it is all one collective voice. Which is not an easy feat, it takes a lot to be able to do that, I know because I have tried. What ends up happening is that each person has their own voice in a text or they try to mimic the other persons voice but ends up being this bleak sort of writing.


Long story short, Onyx Webb is a superb  series that remains consistent in shocking the readers.