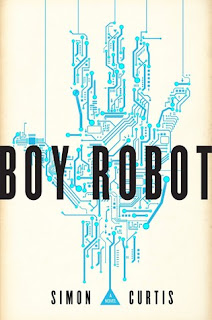 Goodreads Description:
Boy Robot is the first in a planned science fiction trilogy that follows a group of synthetic cell human teens with special abilities as they fight against the government organization that created them and now wants to destroy them.

Review:
Okay so the goodreads description at first seemed to be really short to me but got me excited regardless, and now that I have finished the book I realized that that actually does sum up the book
I must give a huge kudos to the author for writing such a wide variety of characters with unique ways of how they find out what they were, or rather that something was different about them. The stories in this book can be quite graphic though, has a bunch of hard scenes whether it be by physical harshness or emotional.
I loved that this book included a transgender girl and both accepting family members and not so accepting family members, making the book more realistic on that aspect. That unfortunately not everyone can be accepting. The books main character is also from the LGBTQ community, so again, yay for uniqueness versus other , or rather MOST popular young adult books.

The drama in the book is good however it could get a bit confusing because there was just SO much going on all around and so freaking fast! It was just like a load of information being thrown at you left and right as you where only just understanding what happened like 10 pages ago, Then again it adds to the characters feelings about the whole thing, how confusing it must've all been for him although he did seem to take it rather well considering everything that was happening.

"Valeria, you're saying a bunch of positive things, why the rating if it looks like you could've given it a 5 out of 5?"

Well when I say there is a lot of information I mean it but there is also alot of information that was left out purposely and could get irritating. I understand that it is for sake of the plot but when the characters around Isaak, the main character, simply kept telling him he was special and important and not saying why even after demonstrating his powers was just too much for me. I mean they tell him he is the key to everything and he is special and powerful but he is still confused about what he even is. Clearly he is what will potentially bring out the organization that pursued them, just like all great young adult series, but we were left just as confused if not more so than the main character.
Now, a great deal of Young Adult books have a love interest of sorts.

WHAT IS GOING ON I MEAN SERIOUSLY! Towards the end there is a scene that just made my confusion worse about 3 particular people >.> I got whiplash from that scene

Recommend it?
OVerall? Yes, because this book is completely unlike anything I have read before and is totally worth a read 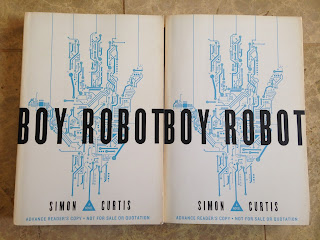 So I received a copy after requesting it from the publisher and it is how I read the book, then comic con hit like 2 weeks later and my friend had snatched me a copy of Boy Robot without her knowing I already had a copy (which I was actually reading at the time she showed me what book she had for me) So as you can see I ended up with 2 copies of it

Now the giveaway is for one (1) ARC copy and I will either be keeping the other copy or hold another giveaway for the other copy later on. I really did like the diversity and how different the book is compared to other YA books which is why I will probably keep my original copy XD

ANYWAYS!
You can find the giveaway right below and it is incredibly easy to enter so be sure to do so

a Rafflecopter giveaway
Brough to you by Vale at 12:00 AM