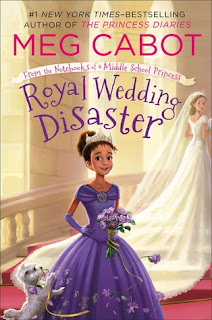 
You are invited to a Genovian Royal Wedding in this second book pulled FROM THE NOTEBOOKS OF A MIDDLE SCHOOL PRINCESS, a Princess Diaries spin-off series, written and illustrated by New York Times-bestselling author Meg Cabot.

Olivia Grace Clarisse Mignonette Harrison still finds it hard to believe that she's a real live PRINCESS OF GENOVIA. Not only does she get to live in an actual palace with her newly discovered family and two fabulous poodles (who all love her and think that she's anything but ordinary!) but she also gets her very own PONY!


Of course, things aren't going exactly like she imagined. Her half-sister Mia is very busy learning how to take over the country while trying to plan a wedding and her father is actually getting remarried himself-to Mia's mother!-and spends most of his time "renovating" the summer palace, although Grandmere says he is just hiding from the wedding preparations. Olivia hardly gets to see either of them.


Fortunately, Grandmere has her own plans for Mia's wedding, and needs Olivia's help to pull them off. Just when Olivia starts to think that things are going to work out after all, the palace is invaded by a host of new cousins and other royals who all seem to be angry at Olivia (although Grandmere says they are just jealous).


As the day of the wedding gets closer and closer, Olivia becomes more and more worried. For such a carefully planned event, it seems like a LOT of things are going wrong... Can Olivia keep this royal wedding from becoming a royal disaster?

Review:
I always take most middle grade books in my bookshelves as a light in between reads but this one in between reads I was excited to get to.
Meg Cabot has never failed to make an interested read for me, the way she rights is simple but interesting. There isnt complicated situations that you feel like it is even complicated for you to understand but rather makes scenes that make you want to know what is going to happen and any kid any age would be able to read it.
This one was of course no exception to that.
Royal Wedding Disaster is the sequel to the companion series of the Princess Diaries and if you are a fan of the Princess Diaries you have probably heard of it if not read it already. This time the story is set in Genovia and Olivia is set to start school at the Royal Academy but must also get ready for her sisters Royal Wedding.
Now, I LOVED the parts that we still get to see Mia and what shes doing which is the premise for a lot of the book if not the whole series, we get to see that she is still the same old Mia we loved but you know, with some Royalness mixed into her. So kudos to Cabot for making that happen in the best way possible.
So back to the writing. It is nothing out of this world, its basic , making it a fast and easy read.

Recommend it?
Yup, if youre a Princess Diaries fan, this is for you