Review: Mirror in the sky by Aditi Khorana 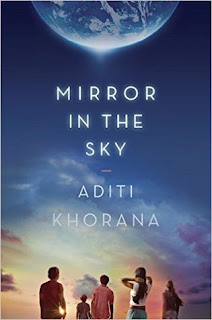 
For Tara Krishnan, navigating Brierly, the academically rigorous prep school she attends on scholarship, feels overwhelming and impossible. Her junior year begins in the wake of a startling discovery: A message from an alternate Earth, light years away, is intercepted by NASA. This means that on another planet, there is another version of Tara, a Tara who could be living better, burning brighter, because of tiny differences in her choices.

As the world lights up with the knowledge of Terra Nova, the mirror planet, Tara’s life on Earth begins to change. At first, small shifts happen, like attention from Nick Osterman, the most popular guy at Brierly, and her mother playing hooky from work to watch the news all day. But eventually those small shifts swell, the discovery of Terra Nova like a black hole, bending all the light around it.


As a new era of scientific history dawns and Tara's life at Brierly continues its orbit, only one thing is clear: Nothing on Earth--and for Tara--will ever be the same again.

Review:
Im not 100% sure what I was expecting of this book but I just know that whatever I did expect of it wasnt enough compared to how I ended up feeling with this book
I loved it, I really did, I feel like I think I know how I would react if this was to happen to us but Tara really nailed the reaction that we all probably would have. Things change when you know what is out there, and this book totally proved that with the slight or major changes that some of the characters went through. Some would use the New World as an excuse for their changes but in reality, that change was already in them, Terra Nova just brought it out of them. Tara spends a good amount of time wondering about the Tara of the Terra Nova world, just how different that other Tara is and if she is better.
When she points out the differences that the other Tara probably has it would get me thinking of my own differences and what this other alternate person would do in a situation and where she would be at the point of our lives.
Cults are built, relationships broken and built. There is a particular scene in which for the main characters, all of the truths come to life and they slowly try to process that and apologize, that was just so refreshing, it all happened fast and it reminded me a lot of Gossip Girl for some reason and I freaking loved it.
For one of the characters, I actually had a suspicion of it actually, for others I had no idea.
Tara is also trying to cope with the fact the Hale, the most popular girl in the school and Nick's girlfriend seems to be absolutely perfect and her new best friend and it is hard for her to like her completely, only to find out that she really cares for Hale.
I mention this because I was also thinking of Hale as being pretty Regina George but how both Tara and I were wrong.
There is just a lot of meaning packed in this book that I wasn't expecting but just made for a completely amazing read.

Recommend it?
100% I had been in a serious reading slump before this book and I got majorly pulled out of it thanks to this read
Brough to you by Vale at 12:00 AM