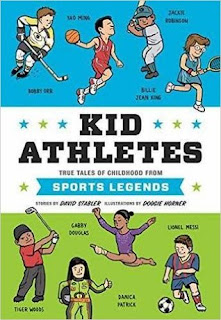 Goodreads Description:
The author and illustrator of Kid Presidentshave reteamed to share 20 true tales from the childhoods of famous athletes. From Babe Ruth (so incorrigible that his parents put him in reform school at age 7) to Muhammad Ali (who learned to fight at age 12 after a thief stole his bicycle), Kid Athletes is packed with inspirational stories from the world of sports. Billie Jean King rose from modest circumstances to win 39 Grand Slam championships; race car champion Danica Patrick fended of bullies who told her "girls can't drive"; and martial arts legend Bruce Lee credited his success, in part, to childhood dance lessons. Every goal, touchdown, and championship comes to life in these kid-friendly and relatable stories, all with Doogie Horner’s whimsical full-color illustrations. Kid Athletes is a slam dunk for young sports fans everywhere.


Review:
This was actually really amazing!!!
So it was a super quick and easy read and it tells you the story of various legends and how they became legends in quick little snippets.

Its kind of inspiring and many of them surprising!
Like I never would've guessed that Babe Ruth had been such a trouble maker when he was younger. Or that Leo Messi got help from the FC Barcelona for medical bills at such a young age.

Im really pleasantly surprised at the author for being able to fit so many legends and all this information in such small segments that are great for kids.


There are illustrations throughout the book that I really loved, they add a certain comedy to the book that just makes everyone really enjoyable. Like... I actually laughed out loud for some of the things said in the caption. They are very sassy lol.


Very happy with this book.


Recommend it?
Totally, if you're a fan of any sport, this is something you'll want on your shelf.
Brough to you by Vale at 12:30 AM