Below you'll find a bit about Dawn followed by an Interview and more information on Anne and Henry and of course, links to buy the book :D 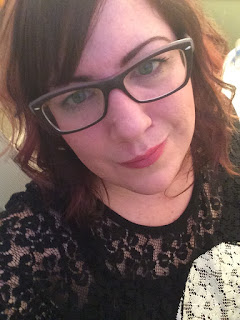 DAWN IUS is a short-story author, novelist, screenwriter, professional editor, and communications specialist. She is the Managing Editor of the International Thriller Writers Association’s monthly e-zine, The Big Thrill, co-founder and senior editor of Vine Leaves Literary Journal, and the author of ten educational graphic novels published by the Alberta Canola Producers Commission. When she’s not slaying fictional monsters, she’s geeking out over fairy tales, Jack Bauer, Halloween, sports cars, and all things that go bump in the night. Dawn lives in Alberta, Canada, with her husband, Jeff, and their giant English Mastiff, Roarke and three bearded dragons. Yes, she does respond to the name Khaleesi.

1.    Tell us a little bit about yourself.  (What inspired you to write? where you studied?  Family? Pets? Ever dyed you hair green *I dreamt I dyed the bottom of my hair pink and now I want to do it, which is why I ask*? Anything goes.)

Last March, I broke free of my boring hair color chains and added not only pink, but purple and salmon, as well. It was exhilarating! But wow, so expensive. As it turns out, those cool colors are not so cool on the pocket book, and so now I’m back to boring brown—though I’m contemplating pink/salmon highlights for book release week. P.S. You should totally dye the ends of your hair pink!

About me. Hm. You can get the gist from my boring bio, but what most people don’t know about me is that I’m a race car junkie with a need for speed. For real. My dream car is a 1967 Shelby GT 500 (aka: Eleanor from Gone in Sixty Seconds) and I currently own a 2009 Mazda RX8 that is old…but full of piss and vinegar. Her name is Anne. (Sidenote: My husband has a big truck. Its name is Henry.) I also love Halloween (as in, my husband I spend far too much time decorating the front lawn with animated props and are known for our annual spooktacular feasts) scary books and movies, The Princess Bride, and Kiefer Sutherland—or maybe it’s just Kiefer Sutherland as Jack Bauer that I love. It’s a bit blurry. (I also love Adam Levine and Charlie Hunnam, but my husband is far less tolerant of me gushing over them. I think even he can appreciate the awesomeness that is Jack Bauer.)

My hubs and I have a giant English Mastiff named Roarke who thinks he’s a lap dog, and three bearded dragons. (Why yes, you CAN call me Khaleesi. I thought you’d never ask!)

2.       How did you feel when you found out you were getting published for the first time ever?
ANNE & HENRY is not my first official published book (other books listed at www.dawnius.com), though it IS my debut contemporary YA, and frankly, it ticks off a number of boxes on my growing writerly bucket list. I come from a family of readers and though my parents have always supported my dream to write (while gently urging me to have a solid Plan B), they are traditionalists, which means “I wrote a book” isn’t real until they can hold it in their hand, pet the cover, and smell the pages. For my Dad, that also means he has to be able to walk into a bookstore and buy it off the shelf. He’s not an order from Amazon kind of guy. So, when my amazing agent Mandy Hubbard sold ANNE & HENRY to Simon Pulse, I spent the first five minutes on the phone in shock, another thirty seconds hyperventilating, and then the next few hours in a champagne-infused daze. I don’t think my parents quite get it, but sending them a signed copy of ANNE & HENRY will mark one of the greatest days of my life. It’s literally a dream come true.

3.       Are you planning on having any author appearances for Anne and Henry? Would you like to have any?
I’d love to travel the world with ANNE & HENRY, but so far, I’m going to do a couple of local signings (I live in Alberta, Canada), a signing in Vancouver, BC, and potentially take part in a multi-author event in Las Vegas…which would be kind of cool.

4.       Are you working on anything new?
Yes! My Fall 2016 book from Simon Pulse is tentatively called OVERDRIVE, and is a combination of ALL THE THINGS I LOVE—hot cars, cute boys, a kick-ass female protagonist, and high-octane fun. It’s loosely pitched as Gone in Sixty Seconds meets THE HEIST SOCIETY. I had such fun researching this book, and even more fun writing it.

1.       Why did you choose to do a retelling on Anne Boleyn and Henry VIII? What inspired you to modernize and retell their story?
I have a soft spot for historical love stories—and the story of King Henry VIII and Anne Boleyn is perhaps one of the most infamous of them all. It’s also close to my heart because my stepdad is utterly obsessed with Anne Boleyn and he often told my sister and I stories about her, perhaps in his way, trying to dispel some of the myths about her. As I started writing ANNE & HENRY and learning more about her, I began to understand his infatuation. She was an amazing lady.

2.       Did you base any characters on anyone you know?
Often I do when I write, but in this case, I really tried to draw from history—which is a bit tricky. It’s hard to make Henry a swoony YA boy when the real Henry was a bit spineless, and in the end, turned out to be a cad.

4.       If this book had a playlist, what songs would be on it?
I actually do have a playlist for this book. Here’s the Soundcloud link: https://soundcloud.com/dawnius/sets/anne-henry
Each of the songs on this list represents a specific part of the book, but one song in particular brings me back to the book whenever it comes on. It’s called FLASH OF LIGHT by Parade of Lights: https://soundcloud.com/dawnius/sets/muse I probably listened to this song on repeat throughout the entire revision process.

5.       Have you thought of writing a sequel for this book?
I’m asked this question a lot and truthfully, a sequel was never in the cards for me—or I suppose, for Anne or Henry. While I learned a lot about Henry VIII while researching this book, his other wives never really interested me in the same way. Something about Anne Boleyn is different, and it’s perhaps why she’s the most written about. That said, I wouldn’t mind exploring other Tudor-era characters and taking them to a modern setting—Bloody Mary, Queen Elizabeth, etc. But it would have to be the RIGHT story, and nothing has gelled quite yet.

6.       If Anne and Henry where to become a movie, what actors would you want in the movie?
To say I think of this often would be an understatement, and honestly, I constantly change my mind, perhaps knowing if I was ever lucky enough to have ANNE & HENRY optioned for a movie, I’d probably be happy with ANYONE. OK, maybe not ANYONE, but you know what I mean.

I’d be interested to know what you and your readers envision for each character, though. <grin>

Vale: I personally picture Alex Pettyfer for Henry and Kaya Scoldelario for Anne

BONUS ROUND: *Cue lights and sound*

1.       If you were stuck on an Island, and could take one book with you, besides your own, what book would it be?
Just one? Gasp. I have a handful of favorites but probably The Princess Bride—it covers the most genres, has a swoon-worthy romance, and is one I never get tired of reading.
2.       If you had a theme song in your life, what song would you want it to be?
I’m not passing on this because it’s not a good question, it is! But I’m not even sure what song best sums up my life theme.
3.       Favorite Candy and Favorite Color?
Candy: ALL OF THEM. Ok, I’ll pick gummy bears. But wow. Tough call.
Favorite color: Green.
4.       If you could have any other job in the world (not in the book industry) what job would you want it to be?
Professional racecar driver.
5.       Chocolate or Vanilla?
Chocolate. 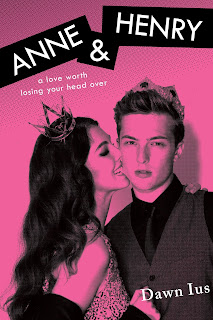 I FREAKING LOVE THIS COVER

ANNE & HENRY
A love worth losing your head over

HENRY TUDOR’S LIFE HAS BEEN mapped out since the day he was born: student president, valedictorian, Harvard Law School, and a stunning political career just like his father’s.

But ever since the death of Henry’s brother—perfect, high-achieving Arthur—his family has been twice as demanding. And now Henry’s trapped: forbidden from pursuing a life as an artist or dating any girl who’s not Tudor-approved.

Then Anne Boleyn crashes into his life.

Anne is wild, brash, and outspoken. She is everything Henry is not allowed to be—or to want. But soon Anne is all he can think about. His mother, his friends, and even his girlfriend warn him away, yet his desire for Anne consumes him. Henry is willing to do anything to be with her. But once he has her, their romance could destroy them both.

Inspired by the true story of Anne Boleyn and King Henry VIII, ANNE & HENRY reimagines the intensity, love, and betrayal between one of the most infamous couples of all time.