As always, amazing to be able to work with an author :D Especially when its for a series you like or someone you deeply admire (mainly cuz they freaking wrote a series you love xD)

Lets get started shall weeeeee? :D


Also, you'll be finding the giveaway down below :D Endes October 1st 2015
About the Author 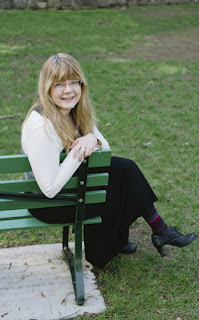 Ever since childhood, Emma Jane Holloway refused to accept that history was nothing but facts prisoned behind the closed door of time. Why waste a perfectly good playground coloring within the timelines? Accordingly, her novels are filled with whimsical impossibilities and the occasional eye-blinking impertinence—but always in the service of grand adventure.
Struggling between the practical and the artistic—a family tradition, along with ghosts and a belief in the curative powers of shortbread—Emma Jane has a degree in literature and job in finance. She lives in the Pacific Northwest in a house crammed with books, musical instruments, and half-finished sewing projects. In the meantime, she’s published articles, essays, short stories, and enough novels to build a fort for her stuffed hedgehog.
Website: EmmaJaneHolloway.com


About Emma
What would you consider the hardest thing about being an author would be?
Being an author—just me and my keyboard—is lovely. The business side is hard, whether you are independent or working with a publishing house. There are too many non-writing issues that take up your time. Just give me a quiet room to daydream and a computer and I’m a happy girl!
-
What authors have inspired you to write?
Many. Dickens, Wilkie Collins, Alan Garner, Lloyd Alexander, Tolkien, Kim Harrison, Jim Butcher. I read a lot of genres. For the Baskerville Affair, I drew on the Holmes stories, of course, and a lot of Victorian classics like The Moonstone. But there’s a pinch of urban fantasy and weird science in the books, too. I never met a monster movie I didn’t like (except zombies. Ick.)
-
What was the most surprising thing about writing the Baskerville Affair?
Characters have a life of their own and a few insisted I change direction. Once or twice, I let them win the argument. Imogen and Tobias had adventures I didn’t initially expect. Tobias in particular goes through a very painful growth of character before he realizes what really matters to him. It makes him a very interesting person to write about and he’s probably my favorite character.
-
Are you currently working on anything new?
I’m working on several different projects right now.
-
What do you like to do when you’re not writing?
I like researching, cooking (I’m a bit of a foodie), and hanging out wherever there are books.
A Study in Silks
-
Sherlock Holmes is a legendary character, what inspired you to write about a niece of such a legendary character and her own adventures?
I have adored Sherlock Holmes since I was a child. I even wrote him a letter when I was in grade school, and the people at the Baker Street museum very kindly wrote back. But as I grew older, I got a more complex idea about who Holmes might have been. The character of Evelina just walked into my head one day, and I think she was my answer to all that cold logic. Not Sherlock’s opposite, because that would be just a cliché, but a blend of the rational and irrational sides of the human experience. She challenges Holmes by having the courage to show who she is, but they have deep mutual respect.
-
What research did you do for this book? Anything involving mechanics or how things went back in the day?
I did tons of research, including a trip to England to visit some of the sites mentioned in the books. I already knew a fair amount about the Victorian era, but there is always more to know. There is a huge amount of information about the science of the time and I only used a tiny amount of what I came across. It’s ironic because I’m probably the most un-mechanical individual on the planet.
-
Is Evelina inspired by anyone you know?
Not specifically. She is her own person.
-
Did you always have that particular ending in mind? Or did you ever consider something else?
A Study in Silks ended exactly as I had planned.
-
Where is Evelina 10 years from now?
Having adventures. Probably on an airship. That’s all I know for certain!
BONUS:
-
If you weren’t a writer, what would your dream job be?
Since I have a day job, being a full-time writer is my dream!
-
What’s your favorite food in the world?
I have many, but the cooling weather has me dreaming of pumpkin pie!﻿ 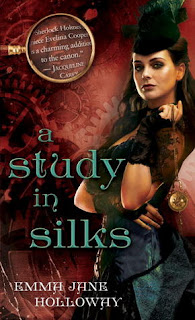 Author Emma Holloway has very generously offered to giveaway a SIGNED paperback copy to one very lucky person. If you already own book 1, you can get book 2 or3. There are multiple ways to get entries, make sure to check them all out below on the rafflecopter link. Below that is also the goodreads description and if you cant wait, you can go ahead and buy the books with the links below :D
a Rafflecopter giveaway
Goodreads Description:
London, April 4, 1888 ~ Evelina Cooper, niece of Sherlock Holmes, is ready for her first London Season - except for a murderer, missing automatons, a sorcerer, and a talking mouse. In a Victorian era ruled by a ruthless steam baron council, mechanical power is the real monarch, and sorcery the demon enemy of the empire. Evelina has secretly mastered a coveted weapon - magic that can run machines. Should she trust the handsome, clever rake who speeds her breath, or the dashing trick rider who would dare anything she would ask?