Review: Walk on earth a stranger by Rae Carson 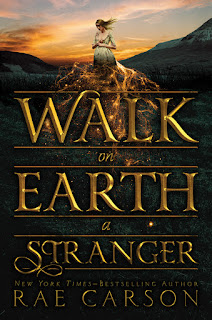 
Gold is in my blood, in my breath, even in the flecks in my eyes.

Lee Westfall has a strong, loving family. She has a home she loves and a loyal steed. She has a best friend—who might want to be something more.

She also has a secret.

Lee can sense gold in the world around her. Veins deep in the earth. Small nuggets in a stream. Even gold dust caught underneath a fingernail. She has kept her family safe and able to buy provisions, even through the harshest winters. But what would someone do to control a girl with that kind of power? A person might murder for it.

When everything Lee holds dear is ripped away, she flees west to California—where gold has just been discovered. Perhaps this will be the one place a magical girl can be herself. If she survives the journey.

The acclaimed Rae Carson begins a sweeping new trilogy set in Gold Rush-era America, about a young woman with a powerful and dangerous gift.

Review:
One of the things I like best about this book is not that Lee (Leah) has these magical powers of being able to sense gold but rather that it touches on the fact of womens role back in the day and how they were treated and to be honest, how they are treated today.
After Lee looses everything, she has a choice to make, try to continue her life or move on to California. She finds the cruel reality of a family member and leaves to make the journey.
But she can't do so by looking like a woman so she changes herself to look like a boy.
Throughout the journey, she feels more respected that when she was a woman.
The journey is HARSH! I honestly wasnt expecting to like this book so much, I just couldnt imagine findint the journey enjoyable to read, how it could not be repetitive.
But boy was I wrong! Carson did a magnificent job in giving readers an idea of how harsh it could get, how people reacted to their surroundings, and the conditions but at the same time keeping people hooked onto the story and still having a solid plot line.
Characters- I freaking loved the characters in this book. Not gonna lie, the college men are my favorites but towards the end of the book, Becky was growing on me, she had one of the biggest changes in the book. Lee stayed solidly strong but at the same time still showed that she was still a girl on the inside, scared of the world and in need of her parents, Jefferson grew stronger.
The things that the whole group (cuz there are a bunch more than what I mentioned) went through united them in a way that I can only beg and hope that I will still see in the next book.

Also, seriously freaking GORGEOUS cover for this book and the next installment as well!