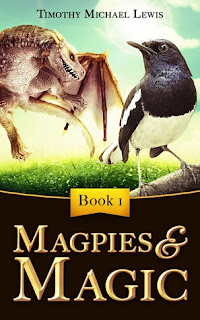 Rate:
4/5
Goodreads Description:
Trouble is afoot in the world of Minaturia: holy war in the East, revolution brewing in the old states of Middlita and rumours of war in the West.
Kolan, a ginger-haired warrior for hire, with his new companion, a magpie called Malcolm, struggle to make a living joining any party of adventurers that will take them.
Malcolm dreams of returning home to his own world, where everything and everyone was much larger. No one believes his stories of a world of giants with no magic. Kolan wishes he would get a big break : he is tired of being the last warrior chosen in every situation. Little does he know that he is about to be propelled into an epic adventure with Malcolm, uncovering the rise of an ancient menace and changing their lives forever!
Review:
This story is amazing
I mean from the very beginning it's full of magic, just like the title.
Princess Candera is cursed after trying to save her father from an evil wizard.
Kolan, a newly turned hero after slaying a dragon, that has let fame get to his head.
Malcom, a talking magpie who accompanies Kolan.
Kolan is recruited to go out on a quest with the cursed princess in order to try and reverse the curse and after recruiting a band of heroes, unlikely heroes, the quest begins!
Author Tim Lewis created a wonderful world in which the characters are so unique and the adventures just pull you in. I don't think there is ever a moment in this book that was boring.
There is just so much to this book: dragons, ogres, elves, wizards, dwarves, talking animals, giants, war! It all just leaves you to wonder, who can you trust?
The book is definitely descriptive so you always have a clear image in your head of what was going on, as if you were watching a movie.
The only thing I struggled with was the names, the author totally got creative with the names and since SOME of the names arent common nmes, I struggled to remember who was who because there are so many people coming into the plot line.
That's  the only reason this book didnt get 5 out of 5

Recommend it?
Yup, one of a kind