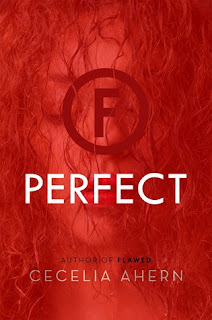 Goodreads Description:
Celestine North is Flawed.
Ever since Judge Crevan declared her the number one threat to the public, she has been a ghost, on the run with Carrick, the only person she can trust.
But Celestine has a secret—one that could bring the entire Flawed system crumbling to the ground. A secret that has already caused countless people to go missing.
Judge Crevan is gaining the upper hand, and time is running out for Celestine. With tensions building, Celestine must make a choice: save just herself or risk her life to save all Flawed people.

Review:
I was surprised about how easy it was to remember everything that came back to my mind from the first book.  The ending was very satisfying, Celestine isn't a complete martyr as some main characters can be in dystopian novels and get super annoying super quick. The duo-logy is so packed with story and character that I can't help but wonder how Ahern can fit so much in so little time without it being overwhelming and confusing.
I really love Cecelia Ahern, shes honestly one of my favorite authors, her stories really pull me in.
Just thought I would go ahead and mention that.
Throw it out into the universe.
Celestine does get a little EXTRA at one point to prove a point to Art, I was like screaming internally, like im extra too but this was a whole nother level of extra. Celestine, even though this might seem contradictory to what I just said, keeps a level head when it comes to bringing the downfall of the guild, she doesnt think of doing everything herself but rather does seek help in carrying out her plan which I guess is the reason why I liked the ending so much. I DO which that there was a bigger epilogue to see how people managed to adjust after everything was over, but I guess being able to imagine our own things is good too, considering how much I grew to care for the character, its not that hard to do.

Recommend it?
Yes, I really do, its a good and solid read.