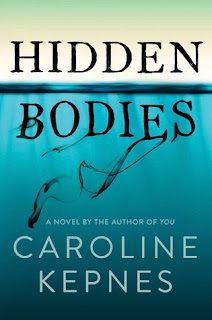 Goodreads Description:
Joe Goldberg is no stranger to hiding bodies. In the past ten years, this thirty-something has buried four of them, collateral damage in his quest for love. Now he’s heading west to Los Angeles, the city of second chances, determined to put his past behind him.

In Hollywood, Joe blends in effortlessly with the other young upstarts. He eats guac, works in a bookstore, and flirts with a journalist neighbor. But while others seem fixated on their own reflections, Joe can’t stop looking over his shoulder. The problem with hidden bodies is that they don’t always stay that way. They re-emerge, like dark thoughts, multiplying and threatening to destroy what Joe wants most: true love. And when he finds it in a darkened room in Soho House, he’s more desperate than ever to keep his secrets buried. He doesn’t want to hurt his new girlfriend—he wants to be with her forever. But if she ever finds out what he’s done, he may not have a choice...(

Review:
I stand by it, this series is twisted as fuck in the best way. HOW did Kepnes think of all of this, jesus.
AND, as I followed the author on instagram, I get to find out that the movie is in the works for the first book. YAS! That shit is going to be GOOOOOOODD.
At first, when I started the book, I was like okay, good flowing from the past book onto this one. As the book went on ,you GUYS, Joe Goldberg is just... Its like he has a need to be completely obsessed with someone, well, a girl, he will become super obsessed with one girl and finds the problem in her life and attempts to fix it, murder will be committed if necessary. Towards the 75% mark of the book I DID start to wonder what had happened to some of the characters from the beginning but then I guess its part of being Joe, that his tendencies get so intense, that he will just entirely forget about his initial problems. He thinks he is a savior of humanity, that him murdering the people that he does is actually mercy killing. LIKE WHAT!
Loosing my shit at this book.

His analysis of people in Southern California totally hurt my feelings XD I mean... GOSH! RUDE XD
But it did kind of remind of the what seems like a life time comparison of people in New York and Los Angeles, makes me wonder if its true xD

Love surprised the shit out of me, like jesus fuck.
The book would stress me out at times, like just HOW could some of these things happen at times.
Like... JESUS!
Things continue to escalate up until the very end of the book, just when you think you've reached the end and that things are over and done with, BAM!
The ending is pretty much
*evil smirk*
*fade to black*
The book is a total rollercoaster ride that I am glad that I got on and gave it a chance even though I nearly died.