Review: The Return of Tarzan by Edgar Rice Burrough 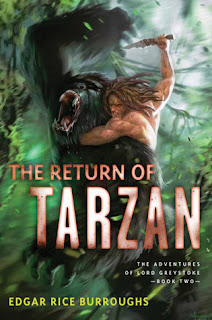 Goodreads Description:
The adventure continues across two continents as Tarzan travels back to England, where he becomes embroiled in royal intrigue and espionage. Later, returning to his African jungle home, he is proclaimed leader of the Waziri tribe--and told about a fabulous lost city full of treasure ruled by a beautiful priestess. The priestess falls in love with Tarzan, but he cares only for his fiancée, the American beauty Jane Porter--and when she's kidnapped by a dangerous tribe of apelike men, Tarzan must use all his powers as king of the jungle to rescue her.

Review:
I dont know what it is about the series that I actually enjoy. There is something about the writing that before I would've totally hated, I know it, but now a days, it is simply so freaking interesting that I wish nothing more than to continue on. Tarzan himself would stress me out, why did he have to be so freaking noble at first, which speaks a lot more about his ape mother rasing him than most people in the civilized world.
Here, we see Tarzan in said civil world and trying to adjust to the rules of the modern world and yet still having the rules of the animal world in his heart and blood.
With all that being said, this one took me a lot longer to get through than the first book, Edgar Rice sure knew how to set up a world, I mean there is a reason his books are among the most popular and classic of its genre, so I can't quiet place what it was. Maybe it was my disappointment over Jane and Clayton but not really being able to hate either one of them, truly understand what it was where they were coming from, and both of them being genuinely noble. But then again, we hardly see them throughout the beginning of the book. It could be that Tarzan being such a perfectly selfless character was getting to me, cuz that just wasn't realistic to me. Then again, that in itself speaks about the flaw we have as a society, as Tarzan would so boldly state. Will I give up on the series? Not at all, I still have one more book in my collection and I intend to tackle it this year.