Review: Under the Dome- Stephen King 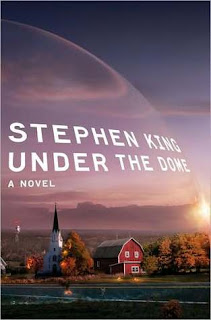 Goodreads Description:
On an entirely normal, beautiful fall day in Chester's Mill, Maine, the town is inexplicably and suddenly sealed off from the rest of the world by an invisible force field. Planes crash into it and fall from the sky in flaming wreckage, a gardener's hand is severed as "the dome" comes down on it, people running errands in the neighboring town are divided from their families, and cars explode on impact. No one can fathom what this barrier is, where it came from, and when -- or if -- it will go away.
Dale Barbara, Iraq vet and now a short-order cook, finds himself teamed with a few intrepid citizens -- town newspaper owner Julia Shumway, a physician's assistant at the hospital, a select-woman, and three brave kids. Against them stands Big Jim Rennie, a politician who will stop at nothing -- even murder -- to hold the reins of power, and his son, who is keeping a horrible secret in a dark pantry. But their main adversary is the Dome itself. Because time isn't just short. It's running out.
Review:
I've wanted to see the TV show in the past, despite the not so fantastic reviews, particularly about the ending, but I have held off on that, wanting to read the book first, and now I have.... I dont know what exactly I was expecting, I NEVER know what to expect out of these books but I do know I was excited, I wanted drama and terrified people but I feel like I was let down by the book. Sure there were some gruesome and fucked up shit going down by some shitty people, and I guess I shouldve been happy with what happened, considering they had somewhat realistic reactions. But somehow it just wasnt enough, I ended up with a lot of questions after reading the book and feel like if the book had been longer, yeah I know, I cant believe I said that, considering the length of this monster, or had this book been split into 2 or 3 shorter versions, it wouldve felt a little better. But sadly, it is what is it. I enjoyed it well enough but wish there had been more or it had had a little but more drama from the people inside the dome.
Recommend it?
yeah. honestly, its still a fascinating book.