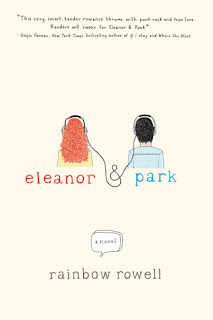 Eleanor... Red hair, wrong clothes. Standing behind him until he turns his head. Lying beside him until he wakes up. Making everyone else seem drabber and flatter and never good enough...Eleanor.

Park... He knows she'll love a song before he plays it for her. He laughs at her jokes before she ever gets to the punch line. There's a place on his chest, just below his throat, that makes her want to keep promises...Park.

Set over the course of one school year, this is the story of two star-crossed sixteen-year-olds—smart enough to know that first love almost never lasts, but brave and desperate enough to try.

Review:
I wasn't promised a happy ending but what the fuck man!
That was depressing! Just when I am getting into the story, BAM rip out your feelings. "Smart enough to know that first love almost never lasts" Okay, I see you ! But

They cut each other off almost completely, after everything that they went though and having to break up because of other circumstances, not because they had a fall out and still, she ignores Park, thats fucked up. I liked the story for the most part but the ending made me so mad.

Everyone , not really but it seems like it, is so freaking in love with this book, dressing it up as all lovely dovely and all that jazz but its like... WHAT IS THIS! THIS WASN"T LOVELY! It had funny parts and stuff but so much angst and
ugh
I just
cant
with
this
book
I
don't
even
know
what
to
say at this point