Review: It by Stephen King 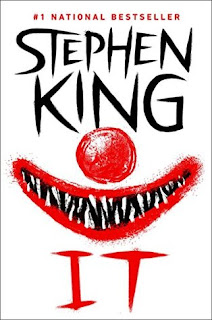 Goodreads Description:
“A landmark in American literature” (Chicago Sun-Times)—Stephen King’s #1 national bestseller about seven adults who return to their hometown to confront a nightmare they had first stumbled on as teenagers…an evil without a name: It.Welcome to Derry, Maine. It’s a small city, a place as hauntingly familiar as your own hometown. Only in Derry the haunting is real.They were seven teenagers when they first stumbled upon the horror. Now they are grown-up men and women who have gone out into the big world to gain success and happiness. But the promise they made twenty-eight years ago calls them reunite in the same place where, as teenagers, they battled an evil creature that preyed on the city’s children. Now, children are being murdered again and their repressed memories of that terrifying summer return as they prepare to once again battle the monster lurking in Derry’s sewers.Readers of Stephen King know that Derry, Maine, is a place with a deep, dark hold on the author. It reappears in many of his books, including Bag of Bones, Hearts in Atlantis, and 11/22/63. But it all starts with It.“Stephen King’s most mature work” (St. Petersburg Times), “It will overwhelm you… to be read in a well-lit room only” (Los Angeles Times).

Review:
This book is GRAPHIC! It is my best friends favorite book and I felt semi forced to read it after that fact and because of the movie coming out and I was simply left cringing at some scenes. Its just like HOW just HOW does he come up with half of the book or so many books at all! Its crazy. It also took some BALLS to really write some of the stuff going on in the books and I feel like that makes a huge part of its thriller portion.
BECAUSE of those cringing scenes, I also feel like the movie wont be done justice and hey, no one wants to see that anyways, but the movie is bound to be a lot freakier anyways because with just the clown description, it isnt 100% doing it for some people, even if they hate clowns like me. But then we see Skarsgaard in his clown make up and its like... Im not going to sleep in the next 100 years!
I felt like the book had some slow scenes but then I picture them out of the book and its like no, it really takes away from it, Im glad they are in there. Like when its described when the kids are playing and making up games. Another thing that bothered me was the whole going back and forth in time, it kinda made it confusing for me and at the same time its like.. You know they are going to make it, I kinda wish the book was simply split in 2 and not mashed together. But then again, im not a legendary best selling author. So what do I know.

Recommend it?
Trigger warnings aside, yes.