Review: The Count of Monte Cristo by Alexandre Dumas 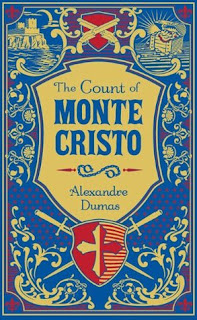 Goodreads Description:
'On what slender threads do life and fortune hang'
Thrown in prison for a crime he has not committed, Edmond Dantès is confined to the grim fortress of Château d'If. There he learns of a great hoard of treasure hidden on the Isle of Monte Cristo and he becomes determined not only to escape, but also to unearth the treasure and use it to plot the destruction of the three men responsible for his incarceration. Dumas' epic tale of suffering and retribution, inspired by a real-life case of wrongful imprisonment, was a huge popular success when it was first serialised in the 1840s.

I can't believe I finished this!
AND THAT I ACTUALLY ENJOYED IT
One comment that probably isnt worth anything but holy shit this guy was fucking RICH! Like filthy rich! If he would be rich in todays terms, just imagine!
I started this book not knowing much about what type of language I would find, but excited for the story. It was surprisingly an easy read! At first, the book starts a bit slowly, not much is going on that kept me interested but I was determined to pull through it! And through it I did, it started to pick up for me to the point that I simply wasnt putting it down and I was staying up until midnight.. Except that last day, that one I fell asleep with the book in my face, 3 hours later.... Yeah, that was awkward.
I just LOVE the way Dantes took his time, and had patience to slowly destroy those that did him dirty, SLOWLY from the INSIDE!
Even then though, while Dantes might find something resembling peace, I dont think he ever is as happy as we was with Mercedes before the 3 stooges put him in jail and thats just sad.
I loved this tale, it had everything that it needed to have, it was satisfying in a way that I was hopeing for but was still surprised by.
I am so glad this book came into my life.