Review: The Ocean at the End of the Lane by Neil Gaiman 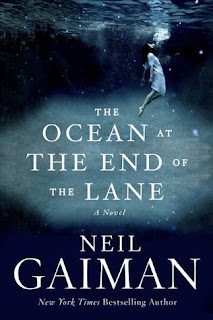 Goodreads Description:
Sussex, England. A middle-aged man returns to his childhood home to attend a funeral. Although the house he lived in is long gone, he is drawn to the farm at the end of the road, where, when he was seven, he encountered a most remarkable girl, Lettie Hempstock, and her mother and grandmother. He hasn't thought of Lettie in decades, and yet as he sits by the pond (a pond that she'd claimed was an ocean) behind the ramshackle old farmhouse, the unremembered past comes flooding back. And it is a past too strange, too frightening, too dangerous to have happened to anyone, let alone a small boy.
Forty years earlier, a man committed suicide in a stolen car at this farm at the end of the road. Like a fuse on a firework, his death lit a touchpaper and resonated in unimaginable ways. The darkness was unleashed, something scary and thoroughly incomprehensible to a little boy. And Lettie—magical, comforting, wise beyond her years—promised to protect him, no matter what.
A groundbreaking work from a master, The Ocean at the End of the Lane is told with a rare understanding of all that makes us human, and shows the power of stories to reveal and shelter us from the darkness inside and out. It is a stirring, terrifying, and elegiac fable as delicate as a butterfly's wing and as menacing as a knife in the dark.

Review:
The book reminded me a bit of Coraline in the aspect of creepiness surrounding kids. Not kid s themselves but things happening to them.

The things happening him as child were just so harsh but that is just the reality of things at times, and THAT is what pissed me off, that some parents would actually do things like that. The story could be a bit hard to follow at times and I don't know if this was because as a young kid he couldn't understand them himself or if this had to do with the writing in the book itself. This was my first Neil Gaiman book so I have nothing to compare it to yet, there is a long waiting list for his books so I will have to get back to you all on that.
After a while I had actually forgot that there was a present and that there was a funeral which added to my confusion.
The book was creepy in the part that this is a fear targeted more towards adults, things that if kids read it they wouldnt be as creeped out by it as we would be. Like Coraline, which by the way is also written by Gaiman, its has the aspect of your family not being your family, and as soon as you don't accept that, shit will go wrong.

Recommend it?
Yeah, it was enjoyable, a tad creepy and even though I was a tad confused at like 3 parts of the book, I still really dug it