Review: The Immortal life of Henrietta Lacks by Rebecca Skloot 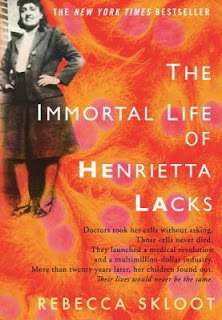 Goodreads Description:
Henrietta Lacks, as HeLa, is known to present-day scientists for her cells from cervical cancer. She was a poor Southern tobacco farmer who worked the same land as her slave ancestors, yet her cells were taken without her knowledge and still live decades after her death. Cells descended from her may weigh more than 50M metric tons.
HeLa cells were vital for developing the polio vaccine; uncovered secrets of cancer, viruses, and the atom bomb’s effects; helped lead to important advances like in vitro fertilization, cloning, and gene mapping; and have been bought and sold by the billions. Yet Henrietta Lacks was buried in an unmarked grave.
The journey starts in the “colored” ward of Johns Hopkins Hospital in the 1950s, her small, dying hometown of Clover, Virginia — wooden slave quarters, faith healings, and voodoo. Today are stark white laboratories with freezers full of HeLa cells, East Baltimore children and grandchildren live in obscurity, see no profits, and feel violated. The dark history of experimentation on African Americans helped lead to the birth of bioethics, and legal battles over whether we control the stuff we are made of.

Review:
Jesus this was such a wonderful book! There are a few set of books that I can consider worth it and this is one of them for sure. It was so interesting, informative and just something that deserves to be shared not just for information but for the recognition that the family of Henrietta and Henrietta herself deserve, particularly after how they were played. What are the chances in life that something like this is discovered, the effect that someone, that their insides, can have on the future! Not just a single person, a single family, but generations to come! How sad and weirdly ironic that she herself held what scientist needed to have been able to help save her.
This book covers a wide set of topics, ethics, science, racism, legality, technicalities and well... lots of ism and ities.

Recommend it?
Freaking yes, this should be assigned reading.