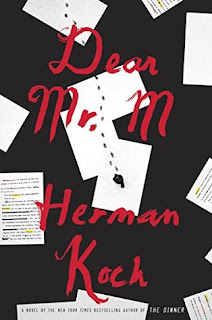 Goodreads Description:
The tour-de-force, hair-raising new novel from Herman Koch, New York Times bestselling author of The Dinner and Summer House with Swimming PoolOnce a celebrated writer, M's greatest success came with a suspense novel based on a real-life disappearance. The book was called The Reckoning, and it told the story of Jan Landzaat, a history teacher who went missing one winter after his brief affair with Laura, his stunning pupil. Jan was last seen at the holiday cottage where Laura was staying with her new boyfriend. Upon publication, M.'s novel was a bestseller, one that marked his international breakthrough.That was years ago, and now M.'s career is almost over as he fades increasingly into obscurity. But not when it comes to his bizarre, seemingly timid neighbor who keeps a close eye on him. Why? From various perspectives, Herman Koch tells the dark tale of a writer in decline, a teenage couple in love, a missing teacher, and a single book that entwines all of their fates. Thanks to The Reckoning, supposedly a work of fiction, everyone seems to be linked forever, until something unexpected spins the "story" off its rails. With racing tension, sardonic wit, and a world-renowned sharp eye for human failings, Herman Koch once again spares nothing and no one in his gripping new novel, a barbed tour de force suspending readers in the mysterious literary gray space between fact and fiction, promising to keep them awake at night, and justly paranoid in the merciless morning.

Review:
This book builds on the suspense from the very first set of pages.
It also starts to build on the plot in a way that for me, started to get a bit hard to keep up with what was going on.
Another thing that irked me was that sure, the suspense was building and I was like holy shit imma burst out of my seems but then it kinda start just bobbing along in a flatline until the end again and it irked me because I was like what if this is one of those stories that have a strong beginning and then suck!
Mean, I know.
But it DOES pick up as the climax reaches but even then, its not as entertaining as the beginning portion of the book.