Goodreads Description:
In Wishful Drinking, Carrie Fisher tells the true and intoxicating story of her life with inimitable wit. Born to celebrity parents, she was picked to play a princess in a little movie called Star Wars when only 19 years old. "But it isn't all sweetness and light sabres." Alas, aside from a demanding career and her role as a single mother (not to mention the hyperspace hairdo), Carrie also spends her free time battling addiction, weathering the wild ride of manic depression and lounging around various mental institutions. It's an incredible tale - from having Elizabeth Taylor as a stepmother, to marrying (and divorcing) Paul Simon, from having the father of her daughter leave her for a man, to ultimately waking up one morning and finding a friend dead beside her in bed.

Review:
SO as we all know, the princess/general has left us.
She was an icon, even after death she is an icon. I mean, Prozac shaped URN?! I actually bought 3 of her books, most recent one included, about a week before her heart attack and oh boy. When I first heard of her being in the hospital  I couldn't freaking believe it. Much less 4 days later when I heard she had passed. I was mad, they had said she was fine. I had literally stopped refreshing for news the night before, I had closed the browser tab on my phone dedicated to her news. Then I go on twitter and people are saying she has moved on and I was just like NO! Like no, yall are lying. And then of course, her mother, Debbie, passed one day later.
How heartbreaking is that. Beyond words that a mother can love her child and be unable to bear the fact that their child is gone before them. Billie, oh boy is she a strong one to be able to power through that amount of pain.


When I read this book, I just wanted to feel closer to the icon that she was and holy shit.
She had a weird life xD


Very unconventional. She herself said that some people might not believe her life but that that's what it was. She also had a hard one, knowing what inward struggles she had. I loved the book, it was so crazy, so her. So Carrie. 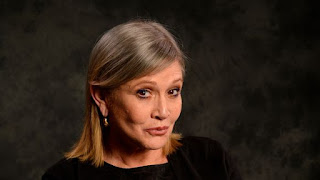