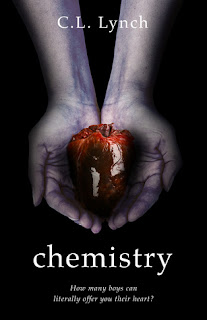 
“I’m not moving to a whole new school! I’ll be eaten alive!”

Stella Blunt’s world is ending. Her parents have dragged her across the country, and she has to start over in a new school. Th is is a big problem, because she doesn’t make friends easily: she’s large, she’s loud, and she doesn’t suffer fools gladly.

The only person who likes her is the cute geek in her Chemistry class. He’s a great listener, he’s smart at science, and he loves her for her mind. Then again, she’s not sure whether that’s a good thing, considering that he also drinks brains from a thermos and walks with a lurch.

To complicate matters, undead hordes have started showing up at her door.

Can Stella take on a new school, an undead romance, and handle a chainsaw?

Written as a satirical feminist response to Twilight, Chemistry is an irreverent romp with a surprising amount of heart from debut author C.L. Lynch, who thinks that fat girls and zombies deserve love too.

Review:
Okay so the book started out pretty damn good and I was all excited for it because it was turning out a lot better than Twilight.
Like a lot of things, basic things in Twilight were a bit what the fuck.
Like really Bella? You're going to go ahead and move with your Dad so your mother can be "happier" I mean, you can still go with her, no need to be such a martyr.
Back to this book
So the book got the whole, proper teenage reactions down to a T.
Like Stellas reactions to how Howard would present himself were 100% correct.
Like as much as girls/guys might say they want an unconditional love like (lets use the obvious) Edward Cullens, in real life we wouldn't be so freaking accepting of said love. We would be in a complete WHAT THE FUCK IS WRONG WITH YOU rollercoaster in real life. Because lets face it, if a guy is stalking you everywhere, is acting like hes about to stab you with a pencil or put a collar around you to not loose you or in Twilights case, WATCHING YOU SLEEP
We wouldn't think its cute, we would be completely freaking out or fearing for our freaking lives.
As any sane person should.

Now, onto why I didnt rate this higher.


Because as good as the book was in the beginning it started to get WAY too creepy for my taste.
Sure, it could be more IN YOUR FACE about the fails that twilight contains but it was a little extreme for me.
Still, it is the best parody (is it even a parody?) of twilight that I have ever seen so Kuddos to Lynch!

On another note, I was trying to look for gifs for this posts and couldnt find any that fit
BUT I found one of Robert Pattinson and it reminded me of Flash from Zootopia in a way xD

Recommend it?
MMMMMMM
yeah, if youre looking for a parody like book of Twilight that shows some good points, this is it