Review: Ever the Hunted- Erin Summerill 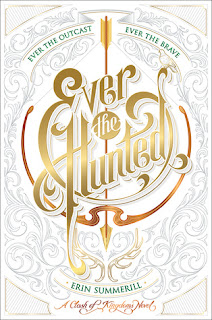 
Seventeen year-old Britta Flannery is at ease only in the woods with her dagger and bow. She spends her days tracking criminals alongside her father, the legendary bounty hunter for the King of Malam—that is, until her father is murdered. Now outcast and alone and having no rights to her father’s land or inheritance, she seeks refuge where she feels most safe: the Ever Woods. When Britta is caught poaching by the royal guard, instead of facing the noose she is offered a deal: her freedom in exchange for her father’s killer.

However, it’s not so simple.


The alleged killer is none other than Cohen McKay, her father’s former apprentice. The only friend she’s ever known. The boy she once loved who broke her heart. She must go on a dangerous quest in a world of warring kingdoms, mad kings, and dark magic to find the real killer. But Britta wields more power than she knows. And soon she will learn what has always made her different will make her a daunting and dangerous force.

Review:
First off, lets briefly appreciate what a beautiful cover this book has, it is seriously a work of art!
Seriously... Look at it....
Okay?
Good.
Anyways, not going to lie to you, as I write this, I am suffering from a splitting headache so my writing might seem a bit off... More than usual I should say
This book was amazing, if you loved Red Queen, I feel like this would be a book you would enjoy, it isnt exactly similar, but I just kept thinking of Red Queen as I read it, maybe its the whole having kick ass powers things?
I dont know but this book was great!
Britta is kind of a bad ass but a stubborn bad ass
Oh boy is she stubborn
She did of course have the typical cliche of, there is no way he likes me, even though it is super obvious HE does which I would say kind of irks me but when I think about it, it is kind of the way things work
The ending was like WHAT!?I was kind of confused by it at first then I slowly started to grasp it and was like OH SNAP! You know those moments? when things suddendly hit you as to how its going and its like
WHAT!? NOOOOOOO Kind of thing?
Well I had that moment at the end of the book xD Which for me, a good ending is CRUCIAL for a book