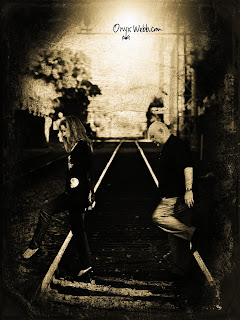 I had the absolute pleasure of reading the start of this series and it is still seriously one that I remember well thanks to the unique way with which it is written and the content being so perfectly Webb-ed together
Oh Yeah I did
And now here I am getting to interview one of the 2 authors, Andrea Waltz, of this wonderful series you can check out on their website http://onyxwebb.com/
You can also find them on Facebook and Twitter
About Andrea


1.       Youre a co author with author Richard Fenton for not just the Onyx Webb Series but Go for No!. How did the whole idea of co-writing first begin?


We started by writing business parables. Mostly because as speakers and trainers, writing a book is like having a business card for what you speak about. But since we love stories so much, we had to write something more creative than just a straight up non-fiction, how to book.


So many things! It started off by me wanting to write paranormal about a guy in love with a girl, who is a ghost. Then it morphed into more stories about other people and has continued to grow into what we call a soap opera because there is so much going on!


3.       What have you learned from writing Onyx Webb that was different from writing business texts (besides that Onyx is a fictional piece)?


The incredible amount of planning especially because we are writing a sequential series – a serial if you will. Before a word is written we go through story boarding and lots of post-it notes. We have to be very clear about where we are taking our characters.


4.       What’s your favorite part about being a co-author and going through the writing process together? Least favorite?


My favorite: I love the brainstorming process. I enjoy coming up with the big ideas, the twists, the shocking connections. Richard is great at that too, but his skill is really executing on those big ideas. As such I am also the first editor in the process and after reading for the third time it gets tough. That’s my least favorite time, the final read. It’s hard to not want to keep changing things up. Sometimes there will be one line and I will change it one way two times and Richard will change it back three times!


We just brain-stormed a lot of fun spin-off ideas from the Onyx Webb series, but we still have a way to go as we are only just publishing Book 6 now.


1.       I really love the fact that you start to figure out how these characters connect with one another, was that always a plan? To have them all connect even though they are from different times?


Once we realized we had a few stories to tell and we were not willing to give up any of them, then we turned that into – then how do they all connect? And that has been amazing and fun to make that happen.


2.       If Onyx Webb became a TV show or Soap Opera, who would you like cast? Are there any particular actors that you picture in your head as the characters in Onyx?


Andrea has all the casting choices figured out. We have Mila Kunis in our head  for Onyx Webb. Tom Hardy would be Ulrich her husband. And we had Amanda Seyfried as his mistress, Claudia Spliatro. And Mika Flagler would be played by Margo Robbie. It would be a pretty cool cast of people.
V: I seriously can't think of who out of all those actors is my favorite xD


3.       How long does did it take to publish Onyx Webb? From inception to publishing? Was there any sort of research that you did?


There was a ton of research and conversation and planning. We started talking about the story in 2012. We finalized the title and the “brand” in 2013 and began plotting and writing. We wrote Episode One and finally published it in September 2014. So as you can see, that was already two years. But after releasing Episode One, we had huge pushback to how little there was to the story. So we decided we needed to release 3 Episodes at a time. Book One, with three Episodes came out in March 2015. It has been a long winding journey but we are flying along now, coming out with Book Six soon.


Fun question! For now, I would say, Madness by Muse.


1.       Favorite Movie?
So difficult! Well let’s say this, the movie we both have been the most inspired by, is ‘Wonder Boys.’ It’s so quirky and funny. The movie we would have liked to write: The Sixth Sense.


2.       If you could visit any place in the world, you and Richard, all expenses paid for a year, WHERE would you go?
We would go to London!


4.       What do you like to do when youre not writing?
We love going to the movies, hanging out with friends, Andrea goes to Epcot here in Orlando. Honestly though – writing is a huge part of our lives. It is pretty all consuming.