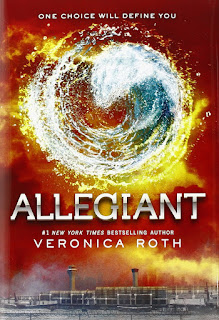 Goodreads Description:
The faction-based society that Tris Prior once believed in is shattered - fractured by violence and power struggles and scarred by loss and betrayal. So when offered a chance to explore the world past the limits she's known, Tris is ready. Perhaps beyond the fence, she and Tobias will find a simple new life together, free from complicated lies, tangled loyalties, and painful memories.
But Tris's new reality is even more alarming than the one she left behind. Old discoveries are quickly rendered meaningliess. Explosive new truths change the hearts of those she loves. And once again, Tris must battle to comprehend to complexities of human nature - and of herself - while facing impossible choices about courage, allegiance, sacrifice, and love.

Review:
Im struggling to get my proper thoughts on this book without spoiling anything. I will try my best though.
WHYYYYYYY WOULD YOU DO THAT TO US?! It was just cruel. Let me explain my rating. Its the best one out of the series, but it played with my feelings so badly that I took it down a star. Okay. Tris.... I love that fourtris is so playful in this one, but at the same time, so much more drama between them. Tris is kind of irritating in the middle, but... So strong at the same time. Caleb... He starts to get his shit together so yay for that. ... IDK what else to say without spoiling D: just.... agh

Recommend it?
If you want to die emotionally.. Yes, read it