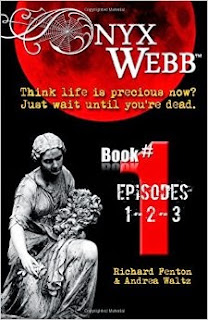 This was totally a first! I loved it! Where to begin? First off, the story is kind of like watching a show, and like.. its even split into "episodes" which was new to me, but I really liked it. I was actually going to publish my reviews like that, by episodes. Maybe Ill do that in the future n.n So the book start off with 3 different stories of 3 different people. The main characters being Onyx Webb the artist, Juniper Cole the prodigy and Koda Mulvaney the billionaire and of course, there are more people in their little worlds, which by the way are all set in different time periods. Then you get to know the characters slowly and you get other points of views in later parts of the books. I'm REALLY trying not to spoil anything XD But anyways, so like slowly you start to realize that their stories are related somehow. They are in different time periods, how can this be you ask? Ghosts. That's how. Onyx is dead annnnnddd other stuff happens. Question is, how did it happen? How are they all connected? Who is the girl in the mirror that Koda saw? What girl? Read to find out what i'm talking about.

Final Thoughts: So like, I just love the way that the books will be released, the whole episodes thing is up my alley,. Its just like waiting for a TV show to air you know exactly when its coming and you just cant wait. There is a bunch of drama in this book, I honestly think that it appeals not just to teenagers but to adults as well, its not like a sweet little love story in here, there is real drama, there is death and life. In this book you dont just fear the living, you fear what is beyond as well. The ghosts are among the living.
Brough to you by Vale at 12:30 AM