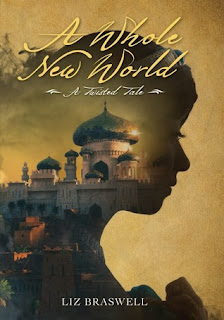 Goodreads Description:
Welcome to a new YA series that reimagines classic Disney stories in surprising new ways. Each book asks the question: What if one key moment from a familiar Disney film was changed? This dark and daring version of Aladdin twists the original story with the question: What if Jafar was the first one to summon the Genie?

When Jafar steals the Genie’s lamp, he uses his first two wishes to become sultan and the most powerful sorcerer in the world. Agrabah lives in fear, waiting for his third and final wish.To stop the power-mad ruler, Aladdin and the deposed Princess Jasmine must unite the people of Agrabah in rebellion. But soon their fight for freedom threatens to tear the kingdom apart in a costly civil war.

What happens next? A Street Rat becomes a leader. A princess becomes a revolutionary. And readers will never look at the story of Aladdin in the same way again.

Review:
In the beginning.. There was darkness

JKJK okay seriously.
In the beginning, the book was super similar to the disney movie with only a bit of stuff added to the story so as to not make it a play by play, THEEENNN the differences started.
I havent seen Aladdin in a long while now, sad, I know, so I actually couldnt tell some of the slighter differences but for me to have noticed SOME things after not seeing the movie in years, says a lot about the book.
Yeah the book is a reimagining of the story but still.
There are parts of the book that had me wondering, is this because I know what happens in the movie or is it just really obvious and following the typically YA villain plot?

The thing about Jafar is that I had wished that in this book that we would get more of a reason as to why he is evil, I always dig knowing a villains origin and I feel like some authors have really started to do an explanation as to why, maybe is its popular enough or maybe authors want to be more original and not start doing origin stories for them but come onnnnn, the public wants this.
HI, im the public.
What I did really like in the book was that I feel like Jasmine had a more of a story to her than in the movie and that she acted more like a princess than in the movie, and by that I mean that she seemed to care a lot more for her people and seemed more willing to make a difference for them, to really want to fight for them to have a better life.

Will I continue on with the other re-imagenings? Damn right I will, this was good enough for me to want to continue onwards.

Recommend it?
I mean yeah, to be honest yeah, the book has mixed reviews and I personally have mixed feelings but it was still a goodreads.