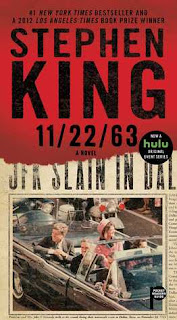 Goodreads Description:
Life can turn on a dime—or stumble into the extraordinary, as it does for Jake Epping, a high school English teacher in Lisbon Falls, Maine. While grading essays by his GED students, Jake reads a gruesome, enthralling piece penned by janitor Harry Dunning: fifty years ago, Harry somehow survived his father’s sledgehammer slaughter of his entire family. Jake is blown away...but an even more bizarre secret comes to light when Jake’s friend Al, owner of the local diner, enlists Jake to take over the mission that has become his obsession—to prevent the Kennedy assassination. How? By stepping through a portal in the diner’s storeroom, and into the era of Ike and Elvis, of big American cars, sock hops, and cigarette smoke... Finding himself in warmhearted Jodie, Texas, Jake begins a new life. But all turns in the road lead to a troubled loner named Lee Harvey Oswald. The course of history is about to be rewritten...and become heart-stoppingly suspenseful.

Review:
This is probably... (goes on goodreads)
this is totally the longest book that I have ever gone through. JESUS
I thought it would never end BUT IN THE BEST WAY.
Let me explain, this is my first ever Stephen King book. I had been wanting to get my hands on the story for a really long time, well, ever since the show came out, (I have yet to see it, I wanted to read the book first).
There is so much going on in the book that I had to keep reminding myself that the things that happened in the beginning, were part of the same book , not like a prequel or such. I found this to be so fascinating, I feel like so many of us have thought of time travel, all the what ifs that come with it and what we would personally do. It was super fascinating to read Jakes adventure/mission through the 50s and 60s and also a bit trippy, trying to remember, along with him, what did and didnt happen in the year that he was on, as well as trying to remember that fact that in the present time, only 2 minutes had passed.
That lead to so many questions like what, does that mean we can live forever this way, living in the past and then does he come back and he is the same age? Shit like that that Jake himself would wonder so I felt like that just added to the whole thing.
Im glad that I went with 11/22/63 as my first book because now I have tackled one of his bigger books (not the biggest but still), its the first book that I have sat through so many fucking pages without knowing anything about it like all the massive ones I have tackled before.

Now that I am finished with the book I will be moving on to seeing the show :D
FINALLY
I swear, the year of falling behind has started, I am behind on so many books (personally, not on my yearly goal) and I am very much behind on shows, there are just so many that I need to start or catch up on!
Stephen King is either a love or hate author, as a single book, I have yet to decide which side I am on.
Back to the book.
As the book went on and what happened is supposed to happen, we finally get to the plot twist. We the readers kept being told about the butterfly effect and surely some of us thought that surely something as saving Kennedy would have a MASSIVE effect and massive effect did it have.  It was a giant mind fuck, trying to figure out, hand in hand with Jake, what the hell happened  and trying to figure out the whole timeline of what would happen if he went back but knowing he had to and trying to think what would happen to THAT present and just... Everything.
How I wish that we DID get the full history of what happened after 11/22/63 in the books universe.
Im guessing, based on what were told its a case of either you die a hero or live long enough to see yourself become the villain.

Jake has this moment, and its a seemly balanced scale, it could go both ways.
What would I do, thats a question that just kept popping in my head, WHAT WOULD I DO.
Would it be the same as Jake?
Who the hell knows
I doubt I wouldve had the strength.