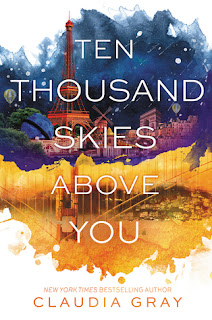 
Ever since she used the Firebird, her parents' invention, to cross into alternate dimensions, Marguerite has caught the attention of enemies who will do anything to force her into helping them dominate the multiverse—even hurting the people she loves. She resists until her boyfriend, Paul, is attacked and his consciousness scattered across multiple dimensions.

Marguerite has no choice but to search for each splinter of Paul’s soul. The hunt sends her racing through a war-torn San Francisco, the criminal underworld of New York City, and a glittering Paris where another Marguerite hides a shocking secret. Each world brings Marguerite one step closer to rescuing Paul. But with each trial she faces, she begins to question the destiny she thought they shared.

The second book in the Firebird trilogy, Ten Thousand Skies Above You features Claudia Gray’s lush, romantic language and smart, exciting action, and will have readers clamoring for the next book.

Review:
In my review for the first book I mentioned how much I loved the Russiaverse and so I can say that when Marguerite went back to it I was very happy, specially because I suspected the big news, it was something that from the last book, since it happened I was like oh girl, you just messed up big time and you dont even know it.
Now, spoiler alert but she says she wont go back, but come on, she has to, we need to know how its going to turn out for her in Russiaverse!
Okay, overall, I freaking love these books because you literally get thrown into new worlds and you have to make new discoveries along with Marguerite!
I dont know if I mentioned this before but big freaking kudos to Gray for that ! Not just creating a single new world but multiples.
This second installment also went into a topic that I considered last time that was bothering me
Okay, so she and Paul seem to be fated to be together because they are together in multiple universes BUT! Shouldnt there also be as many universes in which she ends up with Theo ?
So Marguerite KINDA starts to question that
Gray leaves no stone unturned!
You go girl
The writing pulls you in
the worlds pull you in
the cover pulls you in
I love it

Recommend it?
Yup
Brough to you by Vale at 9:31 AM