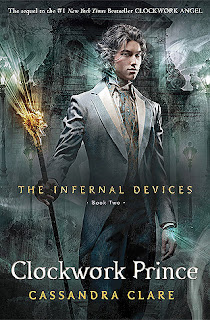 Goodreads Description:
In the magical underworld of Victorian London, Tessa Gray has at last found safety with the Shadowhunters. But that safety proves fleeting when rogue forces in the Clave plot to see her protector, Charlotte, replaced as head of the Institute. If Charlotte loses her position, Tessa will be out on the street—and easy prey for the mysterious Magister, who wants to use Tessa’s powers for his own dark ends.

With the help of the handsome, self-destructive Will and the fiercely devoted Jem, Tessa discovers that the Magister’s war on the Shadowhunters is deeply personal. He blames them for a long-ago tragedy that shattered his life. To unravel the secrets of the past, the trio journeys from mist-shrouded Yorkshire to a manor house that holds untold horrors, from the slums of London to an enchanted ballroom where Tessa discovers that the truth of her parentage is more sinister than she had imagined. When they encounter a clockwork demon bearing a warning for Will, they realize that the Magister himself knows their every move—and that one of their own has betrayed them.

Tessa finds her heart drawn more and more to Jem, but her longing for Will, despite his dark moods, continues to unsettle her. But something is changing in Will—the wall he has built around himself is crumbling. Could finding the Magister free Will from his secrets and give Tessa the answers about who she is and what she was born to do?

As their dangerous search for the Magister and the truth leads the friends into peril, Tessa learns that when love and lies are mixed, they can corrupt even the purest heart.

Characters:
Okay so Tessa is starting to get less soft about the family situation but getting more confused about her feelings for Jem and Will and personally, I like her and Jem better and looooorrrrddddd Cookie !

That ONE scene, you know which one im talking about... YEAH that one xD
I was as red as humanly possible xD
THAT is what a scene is supposed to be in those situations! TAKE NOTES E.L.JAMES!

I love Will, I do, I FREAKING LOVE WILL! But personally its hard for me to get over his douchery, sure he had a good reason for which I should be swooning about what he did and stuff but I cant.
Like... I dont know how to properly express myself with that because ... Its Will... Of course  feelings will be complicated.
Towards the end though I just could not help but feel so bad for him, like my heart felt for him, I was getting frustrated because if things had gone they way he wanted them to then I wouldve been even MORE heartbroke but hey, I know the ending so I cant feel too bad.

Jeeeeemmm, I love Jem to the moon and back, my love for Jem will never ever ever cease to be, he is just the best there is and if anyone has anything bad to say about Jem I will cut them.

Overall:
I mean this book was slightly more intense than the last one, the betrayal got to me because of Charlotte and Henry, I never did like that person much but it still got to me.
I also get the feeling that it is not the last one and that we will see more of other characters in the last book.
Recommend it?
YES!
Brough to you by Vale at 9:53 AM