Review: The Secrets of My Life- Caitlyn Jenner 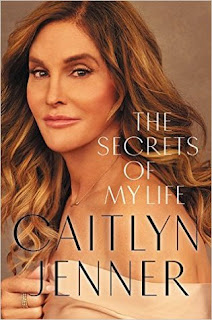 Goodreads Description:
The book will cover Caitlyn Jenner's childhood as Bruce Jenner and rise to fame as a gold-medal-winning Olympic decathlete; her marriages and her relationships with her children; her transition; and her experience as the world's most famous transgender woman.


The book was recommended to me by my library and it had SO many holds on it, it took like 3 months for me to get to it xD


I honestly don't know what to think about it. We all supported Caitlyn when she became her true self but then she has said some controversial things, which she does address in some parts of her book, not all of them though, which has caused her to lose support from both the LGBTQ+ community and non community members. Within the book itself I feel like she contradicted herself in more than one occasion but at least she erased herself from the medias conception that she is the head of the LGBTQ community, admitting that hey, I havent been a part of it for long at all, and even if I was, im not the right person for anyone to call me that.
Now, there are problems in the book that while I am not the proper person to be calling her out on it, stood out to me somewhat. I feel like her title is misleading. What  I mean by that is that in her audiobook intro and the title she talks about letting readers into her personal life, but we dont get anything that wasnt already covered by the media, even in her previous to fame life. I shoulda counted the amount of times she says the phrase, I had gender identity issues. Like.. Thats all we get. No deep dark secrets and not too much on how that made her feel and honest to god affected her not to be able to be her true self and having to hide behind Bruce. As soon as Caitlyn starts to really say how she was seeking help or that some people would find out and have any sort of reaction, she would move on. Like her ex wives, family members, therapist, anything really. Which is like, for a non transgender person, not really making me really feel like I understand even a smidge. Maybe im not meant to understand, which I get that. But the way it was written was like okay, the guy that wrote this book was simply not given enough information about some people.
Back to how she is portrayed. She addresses that she shouldnt be put in an altar and she goes on to be say things like, I dont honestly know what women have to go through in the work place, in a marriage or in any institution, they have struggled more than I have. Along other things that she has been called out for in the media yet in the book I feel like she addresses them in the most minimal way. As in, shes only like PARTIALLY apologizing for the things said about her but just so she looks nice about them, not really meaning it.

Recommend it?
No idea to be honest. From my perspective, sure, it was a light read. From the LGBTQ+ perspective, I cant speak.
Brough to you by Vale at 12:00 AM