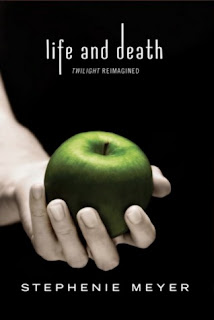 Goodreads Description:
Celebrate the tenth anniversary of Twilight! This special double-feature book includes the classic novel, Twilight, and a bold and surprising reimagining, Life and Death, by Stephenie Meyer.
Packaged as an oversize, jacketed hardcover “flip book,” this edition features nearly 400 pages of new content as well as exquisite new back cover art. Readers will relish experiencing the deeply romantic and extraordinarily suspenseful love story of Bella and Edward through fresh eyes.
Twilight has enraptured millions of readers since its first publication in 2005 and has become a modern classic, redefining genres within young adult literature and inspiring a phenomenon that has had readers yearning for more. The novel was a #1 New York Times bestseller, a #1 USA Today bestseller, a Time magazine Best Young Adult Book of All Time, an NPR Best-Ever Teen Novel, and a New York Times Editor’s Choice. The Twilight Saga, which also includes New Moon, Eclipse, Breaking Dawn, The Short Second Life of Bree Tanner: An Eclipse Novella, and The Twilight Saga: The Official Illustrated Guide, has sold nearly 155 million copies worldwide.
Review:
So I read and reviewed this book over a year ago for the first time but the review was barely posted.
That review is here
I decided to give the book a second chance in early February and discovered that I didn't hate the book as much as I did the first time.

The ending still seems cruel and the differences between the characters started to become more apparent and reasonable as to why the author did them. I am still disappointed that the series won't be continued in this new way but at the same time understand why it can't be done that way. But hey, it would be a whole new series, I mean, because the original script would need to be adapted to the changes in Life and Death, it would become slightly more original.

I am still massively disappointed that Life and Death was no Midnight Sun but hey,... No, nevermind, I have no silver lining, what the hell Stephanie!

I remember the amount of surprise that I got when the book was suddenly released, the excitement that I felt. I wont lie, Twilight was the first series that got me into reading. Yeah, you heard that right. Twilight is the book that made me get into books xD
It, along with Harry Potter are the 2 series that have stuck with me throughout the years.
Sure more have been added slowly but they have to be the bigger ones.
The whole book in itself did feel a bit like fanfiction though, it is still hard to remember how it was actually Stephanie that wrote this and not some anonymous person on fanfiction.net

Recommend it?
Eh yeah. It was better the second time around when you try to see the characters by themselves and not really compare them to the original Edward and Bella.