Game of Pages: Harry Potter and the Chamber of Secrets

Harry Potter and the Chamber of Secrets by J. K. Rowling


Discussion by Valeria and Angela 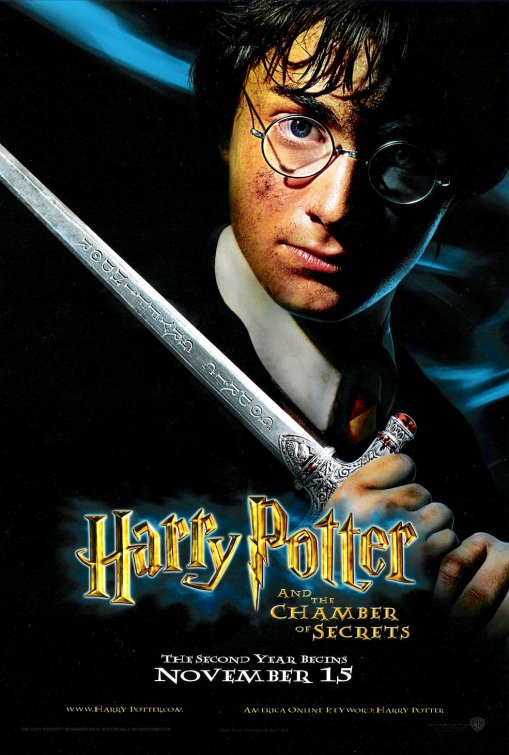 The book "Harry Potter and The Chamber of Secrets" is the second installment of the Harry Potter series, written by J. K. Rowling.

Harry returns gladly to Hogwarts, where he has found very good friends on his first year. But very soon some strange things happen in Hogwarts, animals acting weird, people getting petrified and messages are being written at walls with blood and the legend of the chamber of secret reappears. This all brings the school to be in enough danger that its whole existence is threatened. Harry and his friends try everything to find out what's going on in order to prevent this.

Yet again, J. K. Rowling invites us with this book to dive in the great wizarding world. The book, which is a bigger than the first one, is once again hard to stop reading. We learn more about the characters and the history of Hogwarts, also we get to know some new characters. All in all, it's once again a masterpiece!

Favorite scene in Chamber of Secrets?


A: Ugh, these questions are always so hard :O
I guess that would be…. Ehrm... Where they go in the chamber and Lockhart’s obliviate spell fires back on him and he has the brain of a baby. LOL.

V: I mean, I ask these questions and I know I need to answer them but when it comes to it, I just ask myself why I wrote it in the first place, like I don't know what to say. I guess my favorite for this would probably have to be when Harry is telling Dumbledore everything and its just this moment of like okay, shit will be fine now.


One thing you wished was different in this book?

A: I absolutely hate spiders… I mean they are okay in the book, but still I hate this scene. But in the movie!!! I despise this scene, I sometimes have to look away… and I hate to look away!


V:  Hahaha I'm pretty sure as I wrote the question I had an idea of what I wouldve wanted to change but now that you mention the spiders I cant help but agree. MAYBE I would actually include them in the book more!


Spiders fear the monster, so why not add spiders trying to flee from inside the chamber when Harry is down there and maybe even skeletons of spiders in the tunnels, to show like oh yeah, there is a good and solid reason why they fear it, just look at all these bodies!

A: Nope. Nope. Nope. I think my answer to question two already had this reaction coming.
I would rather stay in the dark then having to follow the spiders… I mean, I wouldn’t even follow the little ones, because yeah there just too many!

When you first read the book, did you honestly think Hagrid was guilty or innocent?

A: That’s a hard questions, because that was a long time ago. It was about 7 years ago…
So everything I now say might not be the truth, it’s just how I think that I thought that time..
LOL.. J K Rowling writes very convincing so I think I found him guilty back then. But yeah I can’t be sure.
Except, I use my time turner, but yeah still it was too long ago … L damn


V: I don't think so, I was convince that it was Draco, sure they proved otherwise but I was still very freaking convinced that it was Draco and his father was either helping him hide it or in the castle itself.

If you could be any character in the series who would you be?

A: Well first character that pops up my mind is Bellatrix. But then again, she dies and nope, don’t wanna die this young.
I would go with Hermione, not because I particularly like her, but because she is super intelligent and will achieve great things in life.
She also knows what real friendship and sacrifice is and she grows stronger with every experience.


V: Hermione too, I mean who wouldnt want the brains she has and in the movie the freaking beauty! THAT GLOW UP THOUGH! Like have people know that pretty much without you the CHOOSEN on (one of them) wouldn't have been able to do it without you (and Ron).
But hey, Mrs. Weasley is not a bad option either. Mrs. Weasley is seriously underrated! She has a loving family and husband and lord help those that fuck with that.

Favorite quote from this book and why?

A: The chamber of secrets has be opened enemies of the heir…. Beware
I love how it kinda rhymes… and yeah it pretty much sums up the story of this book


V: "Honestly, if you were any slower, you’d be going backward." - Sassy Draco


Although there are tiny segments that are also super funny xD But i'll stick with a single quote. A sassy as fuck burn.

Book or movie? Why?

A: Always the book. It doesn’t mean that I don’t like the movie, but the book is always better.
It has more details, helps to understand the story and the decision that the characters make better J

V: The book! I mean for me all the details in the book are just something to really keep in mind. You all will eventually see in the future just how special details are to me.

Who did you originally think the heir of Slytherin was?

A: Again, hard to say… See Answer to question 4.
But probably Draco Malfoy, because the book leads to it…
V: Totally thought it was Draco, pretty sure I mentioned that in the whole Hagrid question, so more details there.

One spell you wish you could know/ master?

A: The Imperio curse… It can be used in a bad and in a good way.
But I think having the ability to control people that they do what you want is very useful.
As long as no one with bad goals uses it to become the most powerful person in the world or something.
V: I mean, same as Ang, but overall, is apparating a spell? I mean I sure as hell would like to appear anywhere, imagine! Oh shit, Jennifer Lawrence is in So-So cafe in Italy?

Important lesson from this book?

A: Never believe a memory.. It can be changed, remembered wrong or something similar.
And never say you are someone (lockhart) that you aren’t.. Because one day someone will find out or you’ll mess up a lot.


V: I mean, for me I guess it would be to me its to really be aware of everyone around you. No one expected it to be Ginny in a way, she was being influenced. But like had they paid more attention to her, her brothers, they would've been able to tell something was off.

Guys!
Thank you so freaking much for reading this weeks post! We might be taking a Harry Potter break for next week, just so you all aren't annoyed
Is that even possible? It's Harry Potter
We shall see how things go this week.
- Valeria and Angela
Brough to you by Vale at 12:00 AM