Review: The Gentleman by Forrest Leo 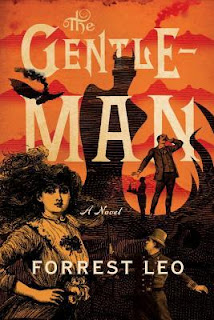 
A funny, fantastically entertaining debut novel, in the spirit of Wodehouse and Monty Python, about a famous poet who inadvertently sells his wife to the devil--then recruits a band of adventurers to rescue her.

When Lionel Savage, a popular poet in Victorian London, learns from his butler that they're broke, he marries the beautiful Vivien Lancaster for her money, only to find that his muse has abandoned him.

Distraught and contemplating suicide, Savage accidentally conjures the Devil -- the polite "Gentleman" of the title -- who appears at one of the society parties Savage abhors. The two hit it off: the Devil talks about his home, where he employs Dante as a gardener; Savage lends him a volume of Tennyson. But when the party's over and Vivien has disappeared, the poet concludes in horror that he must have inadvertently sold his wife to the dark lord.

Newly in love with Vivian, Savage plans a rescue mission to Hell that includes Simmons, the butler; Tompkins, the bookseller; Ashley Lancaster, swashbuckling Buddhist; Will Kensington, inventor of a flying machine; and Savage's spirited kid sister, Lizzie, freshly booted from boarding school for a "dalliance." Throughout, his cousin's quibbling footnotes to the text push the story into comedy nirvana.

Lionel and his friends encounter trapdoors, duels, anarchist-fearing bobbies, the social pressure of not knowing enough about art history, and the poisonous wit of his poetical archenemy. Fresh, action-packed and very, very funny, The Gentleman is a giddy farce that recalls the masterful confections of P.G. Wodehouse and Hergé's beautifully detailed Tintin adventures.

Review:
Forrest Leo’s debut novel The Gentleman revolves around Lionel Savage, a Victorian London poet who marries for money and inadvertently sells his wife to the Devil.
The Gentleman lacks any serious drama. Don’t get me wrong, although it may seem like the protagonists are in grave danger, the author plays it for laughs favoring facetious wit and levity instead. Not only does the book accept ridiculousness, it encourages it. The further the characters delve into the plot the more chaotic everything becomes in a story that feels more like a cartoon than a book.
This cartoonish charm is more apparent in the protagonists. Each character protrudes with quirky personality, my favorites been the selfish but hilarious Lionel Savage whose ego is so gigantic, it overshadows his mediocre poesy. And his brother-in-law, the adventurer Ashley Lancaster who seems more thrilled to the idea of facing grave peril than he is concerned over his sister’s life.


It’s obvious that the book’s biggest strength is its humor. I have no doubt that anyone reading this will laugh and fall in love with these characters as much as I did. My only complaint is the author’s colloquial diction which took me a while to get used to. But once I did, it became a great part of The Gentleman’s charm.

Recommend it?
I am sure everyone will enjoy reading this hilarious novel.