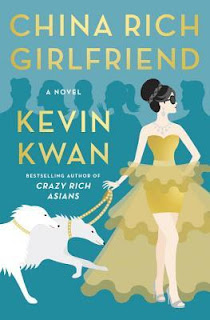 Goodreads Description:
On the eve of her wedding to Nicholas Young, heir to one of the greatest fortunes in Asia, Rachel should be over the moon. She has a flawless Asscher-cut diamond from JAR, a wedding dress she loves more than anything found in the salons of Paris, and a fiance willing to sacrifice his entire inheritance in order to marry her. But Rachel still mourns the fact that her birthfather, a man she never knew, won't be able to walk her down the aisle. Until: a shocking revelation draws Rachel into a world of Shanghai splendor beyond anything she has ever imagined. Here we meet Carlton, a Ferrari-crashing bad boy known for Prince Harry-like antics; Colette, a celebrity girlfriend chased by fevered paparazzi; and the man Rachel has spent her entire life waiting to meet: her father. Meanwhile, Singapore's It Girl, Astrid Leong, is shocked to discover that there is a downside to having a newly minted tech billionaire husband. A romp through Asia's most exclusive clubs, auction houses, and estates, China Rich Girlfriend brings us into the elite circles of Mainland China, introducing a captivating cast of characters, and offering an inside glimpse at what it's like to be gloriously, crazily, China-rich.

Review:
When I finished the first book in the series I was left thinking. I want more but what more could be added to this? I don't have all that many questions that need to be answered. I was wrong! There was so much more world left to be discovered, a world that only Kwan could build for me! I was baffled by some of the things going on in this second installment, and the amount of money being spent on it as well. I had to continuously stop throughout the book to remind myself that this is all fictional money being spent but still, holy crap. This installment was a little more serious than the first, but no less funny, it simply had more things going on than I had expected. Initially, things would seem a little out of character but in the end, it all just made a whole world of sense. I loved this book to the ends and back, I do hope that the Crazy Rich Asians movie does well for more than one reason, this is one of the reasons.