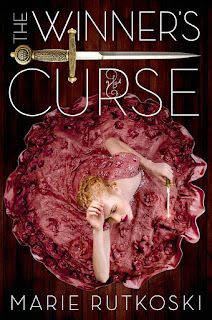 Goodreads Description:
As a general’s daughter in a vast empire that revels in war and enslaves those it conquers, seventeen-year-old Kestrel has two choices: she can join the military or get married. But Kestrel has other intentions.
One day, she is startled to find a kindred spirit in a young slave up for auction. Arin’s eyes seem to defy everything and everyone. Following her instinct, Kestrel buys him—with unexpected consequences. It’s not long before she has to hide her growing love for Arin.
But he, too, has a secret, and Kestrel quickly learns that the price she paid for a fellow human is much higher than she ever could have imagined.
Set in a richly imagined new world, The Winner’s Curse by Marie Rutkoski is a story of deadly games where everything is at stake, and the gamble is whether you will keep your head or lose your heart

Review:
It took me a bit of time to get into... Like half the book. It was so slow for me, there was something about the way that it was written that just seemed so freaking formal to me. But then once I got into it, I binge read the rest of the book. I lovveeeddd the scene of the kiss. I was going to delete that last part because I was thinking that it was probably a spoiler but then I was like nope, every book eventually has a kiss in it XD. The ending of the book was particularly intense but at the same time I was like WTF that just doesnt make sense. Like this guy is so into like... killing everyone and then hes like you know what, ill do what you want if you do this one thing. Like REALLY? youre willing to get rid of everything just for that? I thought you were supposed to be super cruel >.> But ttthhheeen I was like okay, it cant be that easy, this guy has to have some super evil plan right? Which is why I need to get the second book now XD

Recommend it?
Yeah, you simply have to give the book a chance.
Brough to you by Vale at 12:00 AM